The gardens sloped down the small hill to the grey waters of the West African sea. The Colonel’s house was perched on top of the hill, a white, ordinary two-storey affair overlooking the ocean. The house had no particular charm, but the gardens were another matter. Trees everywhere for shade from the African sun: palm trees for palm wine; mango trees, with their wide trunk and branches, perfect for children to climb, if you avoided the sticky sap and the giant magnan ants that seemed to favour mango trees. They are called driver ants in English or Siafu in Swahili, in East Africa. Magnan in West Africa. Nasty buggers. With a mean bite.

There were Flamboyant trees, an acacia-like tree with bright orange or red flowers all blooming that day. Banyan trees with their large shiny leaves; frangipanier or plumeria trees and their white and yellow flowers with a heady perfume.

The gardens were arranged in terraces, with narrow dirt paths swiveling down to the sea. All sorts of flowers grew in the shade or the sun-lit spots, hibiscus, Bougainvillea, impatient, reds, whites, yellows, blues… 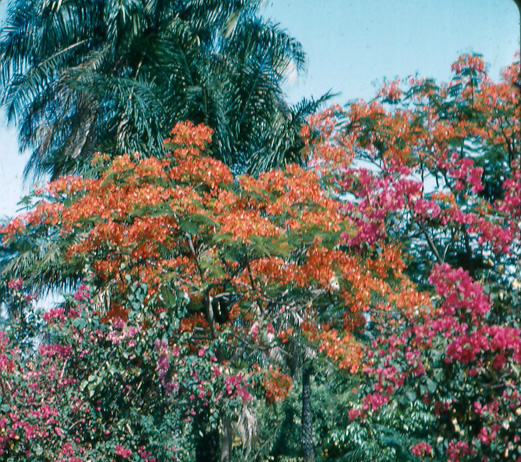 Today was a great day. The “baptism” of the Colonel’s first son. The Colonel… I shall call him Colonel Boubacar, pronounced Bubacar. I remembered him many, many years later when a friend challenged me to identify a French novel by its opening line:

(“It was in Megara, a suburb of Carthage, in the gardens of Hamilcar.”)

By mere luck, I recognized Salammbô, by Flaubert, though I hadn’t read it. Still haven’t. It’s on my shelves. Will get to it one day. Hamilcar was a General in Carthage, Bubacar is a fit name for the Colonel. He was a tall, gentle man with a high forehead, a small moustache and a wide smile. He’d served in the French Army during WWII. After Independence from the French he’d been promoted to Colonel and appointed Deputy Chief of Staff. His wife, whom I will call Asmatou (pronounced Asmatu) was a handsome tall woman from Saint-Louis in the North of Senegal. As such she was a Peul or Fula or Fulani, a member of tribe that stretches across many countries in West Africa from Senegal to Guinea to Gambia to Mali to Burkina to Niger. Peul women are renowned for their beauty and elegance. Asmatou was no exception, she held her head high on a long slender neck. 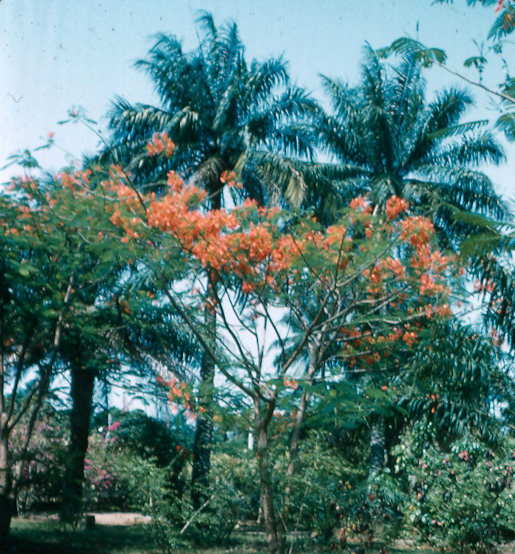 Colonel Bubacar and Asmatou were good friends with my parents, at a time, the early years of Independence, when friendship between blacks and whites, Africans and Europeans was neither common nor easy. But friends they were. Asmatou was a midwife. I distinctly remember when she invited my mother and us kids over to the only hospital in the capital city. The hospital she worked at. I do recall very clearly the misery, the once-white walls, black with grime from the ground to about three of four feet up, where the patients’ relations would squat on the ground, their back against the wall, waiting for a cure or the inevitable end. Some beds held several patients, there was no medical equipment to speak of.

My mother was appalled. She asked Asmatou how they could possibly do anything for the patients. Asmatou replied with a wan smile:

“We do what we can. There are no medicines to speak of. And only a handful of doctors.”

“Let me speak with the (French) Ambassador”, my mother said. Asmatou smiled again and said:

“The Ambassador is a good man, but as you know, De Gaulle and our President are not exactly on speaking terms.”

Now, on that day, in the gardens of Colonel Bubacar, all was joy and happiness. Musicians played the Kora, a 21 string instrument built from half a large calabash covered with cow skin for resonance, and a long hardwood neck. I can still recognize the sound of a Kora with my eyes closed. They also played balafon, a wooden xylophone of West Africa. And drums. Of all kinds.

The griots, traditional story tellers and singers, sang the praise of the father and mother. And the ancestors of both families, back ten or more generations.

The ceremony is called Indé or Nguentel among the Fula of Senegal. A name-giving and presentation of the baby to society, it involves inviting dozens, hundreds of relatives, friends and allies. My mother, my little sister and I were the only Europeans invited. A mark of esteem I guess. We were obviously dressed “to the nines” for the occasion. My little sister wearing her only dress. She was six or seven. I was eight or nine and wearing shorts and my – only – starched white cotton short-sleeved shirt. And shoes that were killing my feet. Sis’ and I normally ran around all day barefoot and swimming-trunks clad.

The festivities are normally organized a week after the baby’s birth and take a long time. Verses of the Quran are recited, there is music, the baby’s head is shaved, more music is played. A Marabout, a moslem holy man in West Africa, whispers the baby’s name in both his ears, and then makes it public for all the attendants who applaud. And over and over again the musicians and the griots sing the praise of the families.

Colonel Bubacar was attending other guests. We were sitting next to Asmatou who wore an African “Boubou”, a long colourful flowing wide-sleeved robe, traditional in West Africa. She had on large gold earrings and a necklace. A dozen gold bracelets clanged on her long and slender wrists. Gold in West Africa is a rich yellow. A soft 24 carat that makes the gold tender. She gave my mother a bracelet once. The bracelet is still around, delicate, bends easily.

This was probably before the shaving of the baby’s head, because I remember his hair. He was plump and cute and fast asleep on his mother’s lap. What caught our attention was the fact that the baby was honey brown, not black. And his black hair was more curly than kinky. Never one to miss the opportunity to put her foot in her mouth – and not care – my mother asked Asmatou about the baby’s colour and hair. Asmatou smiled, curling a lock of her son’s black hair around her long, slender fingers. She said:

“The hair gets kinkier pretty soon, and as for the colour, that’s how we are born, just brown. It’s the African sun that makes us black.”

My mother said nothing, waiting for more. Asmatou went on:

“As a matter of fact, I don’t know how you European women do.”

“How so?” my mother asked. Asmatou answered:

“Me? I always knew exactly what my baby would look like, all nine months. And he was born exactly as I dreamed of him: honey brown, with black, curly hair. And beautiful.”

The two women smiled at each other. I still remember this conversation to the word. I’d learned something that day. 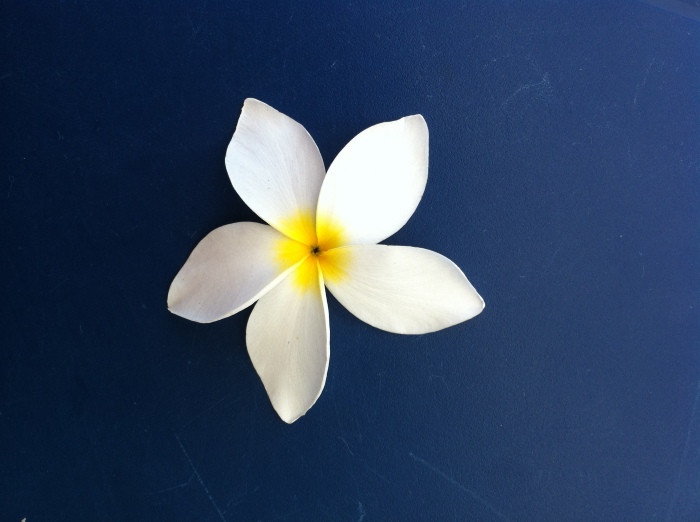 We last saw Colonel Bubacar a few years later, in Amsterdam. We’d been transferred to Holland. The change from Africa was brutal, weatherwise. Though the worse was to wear shoes all day. And adjust to the weather. On the up side, I discovered – at ten – the freedom of riding a bike everywhere. No adults of chauffeur (chauffeur? I know, I’m such a snob) to necessarily drive you everywhere. Every day in Holland, under rain, snow or sleet, I would take my bike, give an estimated hour of return – always stick to the negotiated time and you will be fine – and ride your pony, and ride. I mean, ride your bike and ride.

Colonel Bubacar was on a trade mission to Holland. Of course he’d rung my parents, and come for tea to our flat by the canal. He was escorted by a young and faintly aggressive captain, whom I shall call Diallo. The Colonel was his usual good-humoured self, but when the Captain went to wash his hands, Bubacar told my mother:

“Watch what you say with the Captain. He is not to be trusted. The President has stuck him on me like a shadow. I know he reports ever word I say. And more. True or not. Especially not true.”

Obviously, later that night, at the restaurant where my parents had invited the Colonel and his shadow, my mother could not resist engaging a debate on Africa. Debate that she lost, for the Captain, unpleasant as he was, was also a sharp man. But that, “best beloved”, is another story.

Two or three years later, we were back in Africa, on the East side, in Kenya. We learned from a common friend, that Colonel Bubacar had been arrested, falsely charged and executed by the President, along with many other Cabinet members. The first of an endless series of massive arrests and executions. Asmatou, the Colonel’s wife, had managed to flee the country to Senegal with the baby boy.

This story is dedicated to the memory of our friend, Colonel Kaman Diaby, murdered in 1969 by the then ruler of Guinea whose name I will not write (I’d rather spit on the ground), and to Kaman’s wife, Aïssatou, my mother’s friend. If Aïssatou is still alive, she must now be a very old lady. The baby boy must now be over fifty, with children of his own. He most likely does not remember his father. I do.

I would like to thank my Graduate school friend Amadou Sy, a Peul from Senegal, with whom I have kept in touch over the years and who’s freshened up my memory with the details of the baptism ceremony in Senegal, Guinea and many other places in West Africa.

This is a work of non-fiction. A true story as seen trough the eyes of the child that I was. Some details may vary from actual reality, but the images of the little baby are quite clear in my mind’s eye, as are the words of his mother and father.

Conakry, Guinea, West Africa. C.1962-1963. At one of the countless cocktail parties held in those days. L. to r. Colonel Kaman Diaby. Claude Millet, the local manager of Péchiney, then a world leader in the extraction of bauxite, an aluminium ore, of which Guinea, one of the poorest nations on earth, holds half of the world’s reserves. My father, Cyril, local manager for Air France, is on the right.

77 thoughts on “The Colonel’s gardens. An African childhood.”