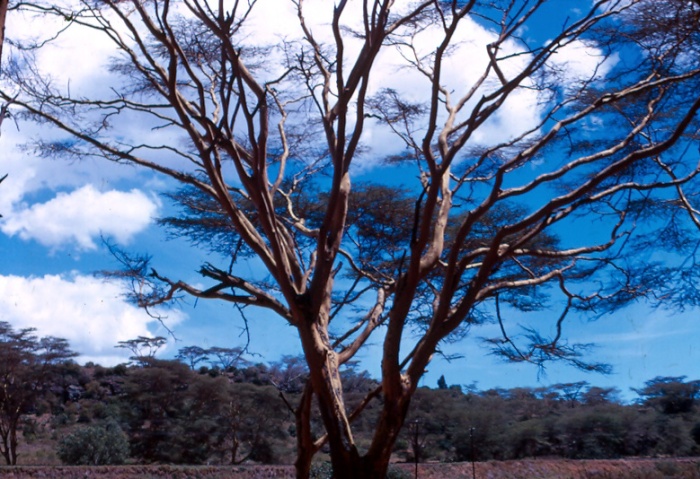 We left West Africa in ’64. We were lucky: all our friends who stayed in Guinea, Europeans and Africans, were jailed, tortured, some executed. See the Colonel’s gardens and its epilogue:

We spent a 3 years’ intermission in Holland. Drastic weather change. On the downside, I had to wear shoes all the time. Can’t go barefoot in the streets of Amsterdam. On the upside, I got a bike and permission to ride out all day until 6PM. Freedom at 10 years old. Yes!

Then my father was promoted to East Africa. Kenya. He was the head of Air France operations for East Africa, from Ethiopia to South Africa… Bliss. Back to Africa. Above, a typical East Africa thorn tree. c. 1967. 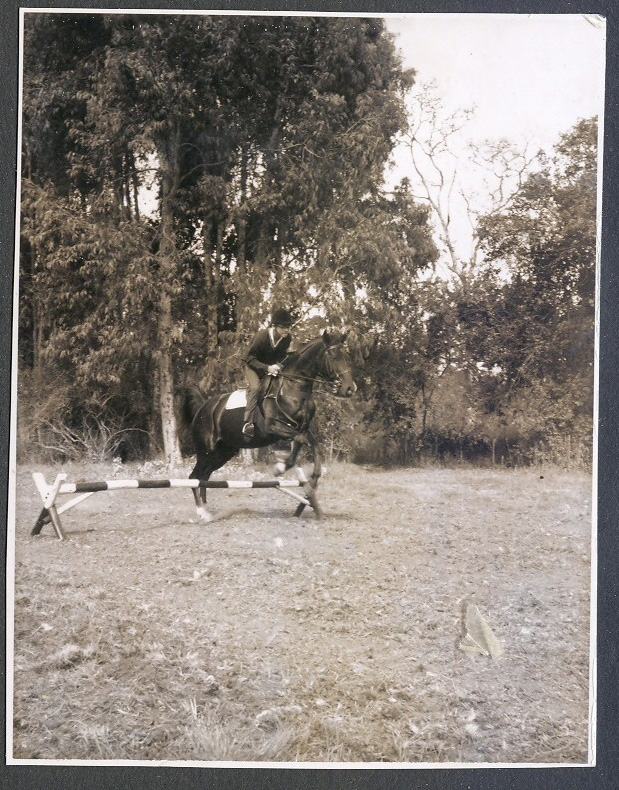 Back to serious business: yours truly  learning jumping on Honey, in Karen Blixen’s old neighbourhood. Honey was a beautiful mare with a mouth so soft I could only use a rubber-coated bit. I once put  a metal bit by mistake, she threw me down three times before I realized what I had done… 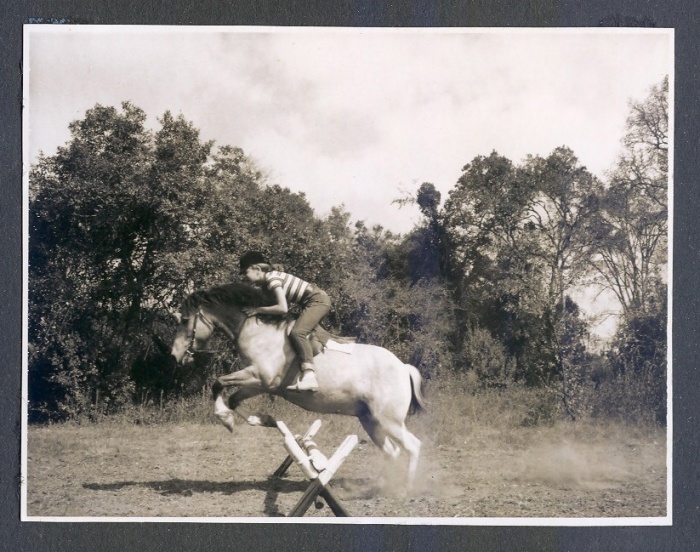 Little sister on Storm. We had a true 19th century education, though living in the 20th. Home schooled. First my mother taught us, then we had private teachers for maths and physics, the heavy sh..tuff. We learned how to ride. And to fence. My weapon of choice: foil. though I must confess sabre is the most fun. (Riding and fencing? I should have been a Musqueteer) 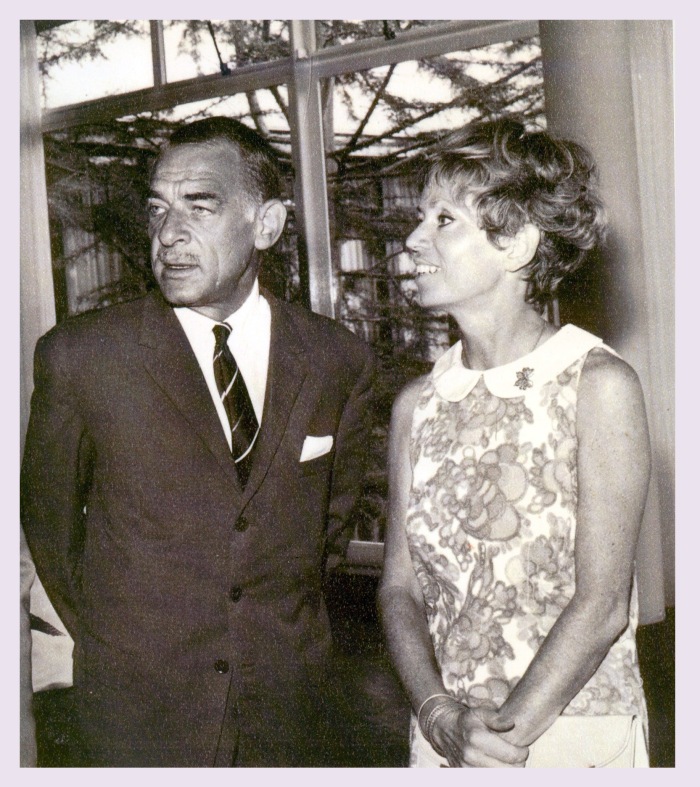 My parents at their welcome cocktail in Nairobi. New Stanley Hotel, the “thorn tree café”. There is a thorn tree growing inside the hotel The New Stanley was the watering point of the “white hunters” before Independence, when hunting was still allowed in some parts of Kenya. It then became the rendez-vous of business people and politicians. Year: 1967. He was 49, she was 41. Sooo young! 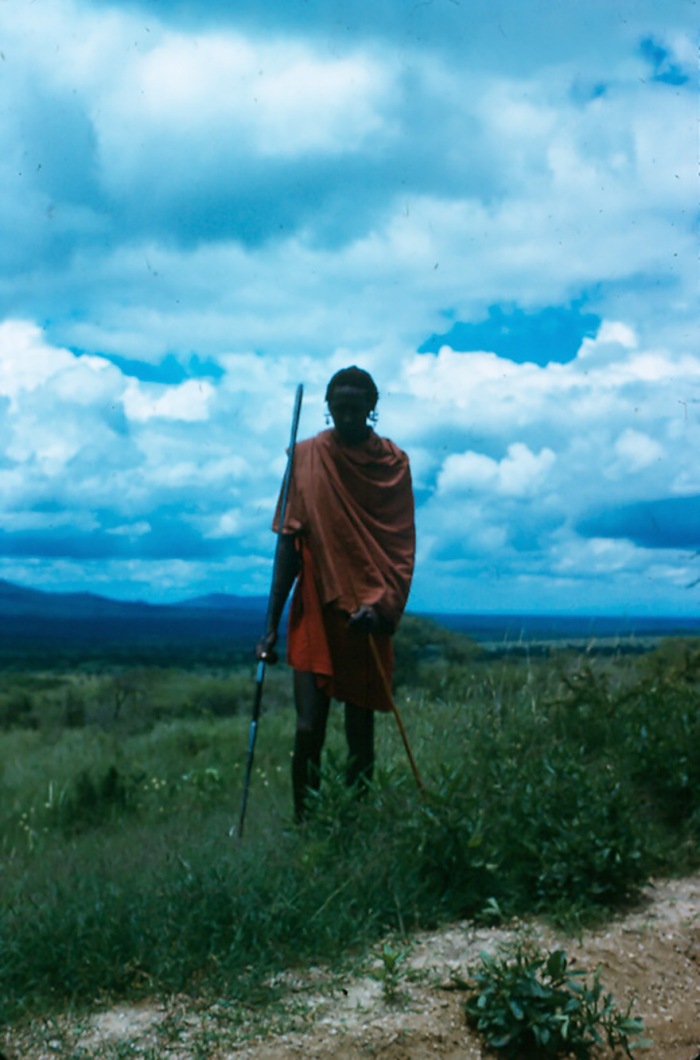 Maasai Moran or warrior. Amboseli National Park, Kenya. c. 1968. He wears the traditional spear, forged by the wizard Maasai forgers  to hunt lions. You could not become a warrior if you had not killed a lion in single combat… It may still go on, despite the Kenyan government’s ban on lion hunting… 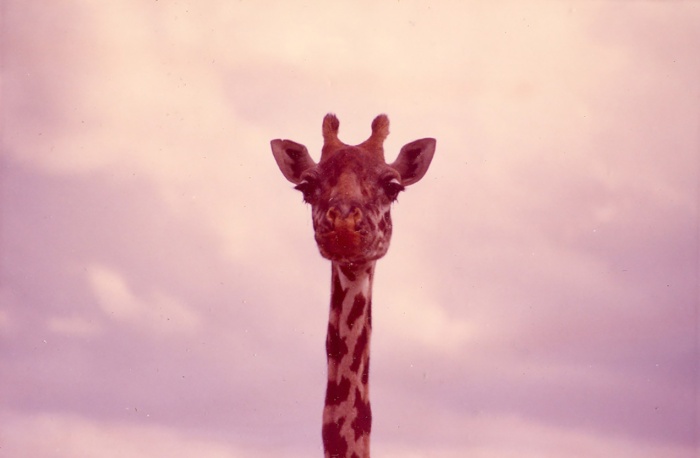 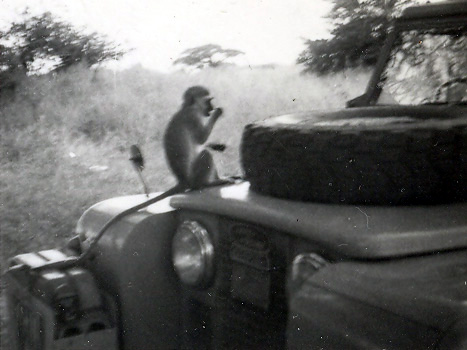 Vervet monkey on our friend Gérard’s Land-Rover. c.1967. Tsavo National Park. Instamatic camera… I had not graduated to reflex yet… Darn. 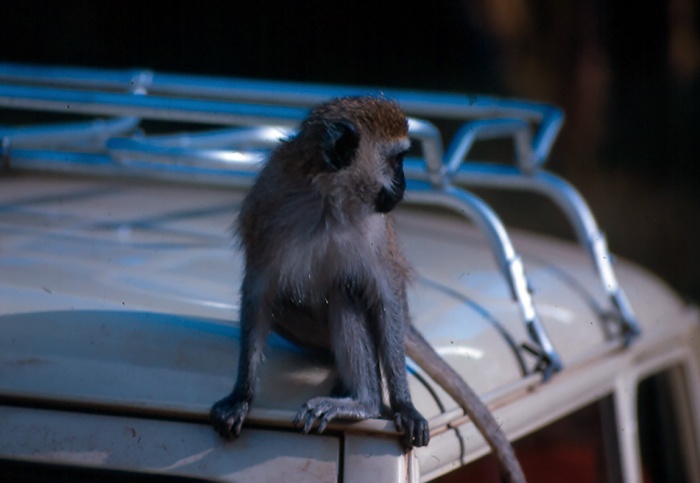 Same little guy, or his cousin, at Tsavo. On that very same location, Tsavo national Park, many years later, a band of those circled Daughter#2 who was then 3 and was carrying a sandwich from breakfast… Bad idea. She was walking behind me and cried: “Daddy, the monkeys!” I turned around, a few dozens of the little buggers were circling her, aiming for the sandwich. “Throw the sandwich!” And that was it… Lesson # umpteen: never carry food when there are monkeys around. Or coatis… 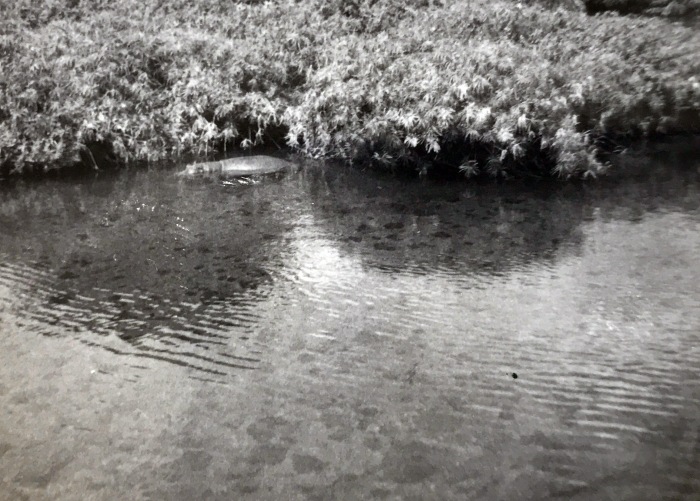 1967. Hippo at Mzima springs, Tsavo national park. It still is a must to walk under the canopy of trees. And the vervet monkeys. Hippos. Crocodiles. Tilapia. A preserved corner. 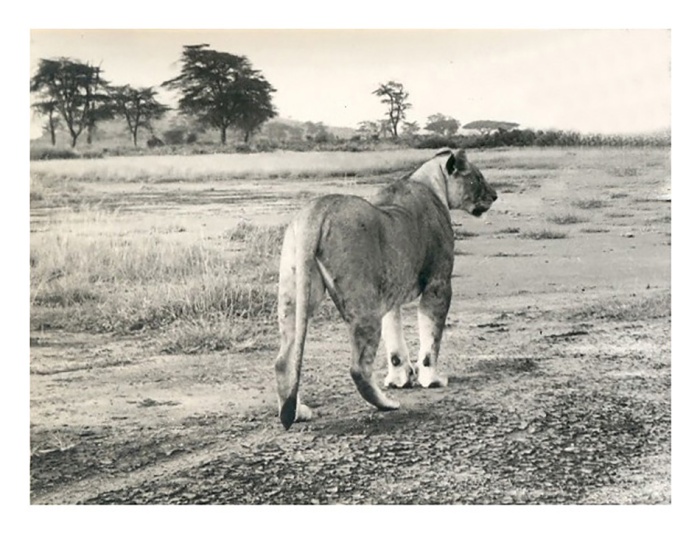 Lioness on the prowl. Amboseli national park, Kenya. Remember: never step out of the vehicle. When you’re inside, lions ignore you. Outside? You’re food. 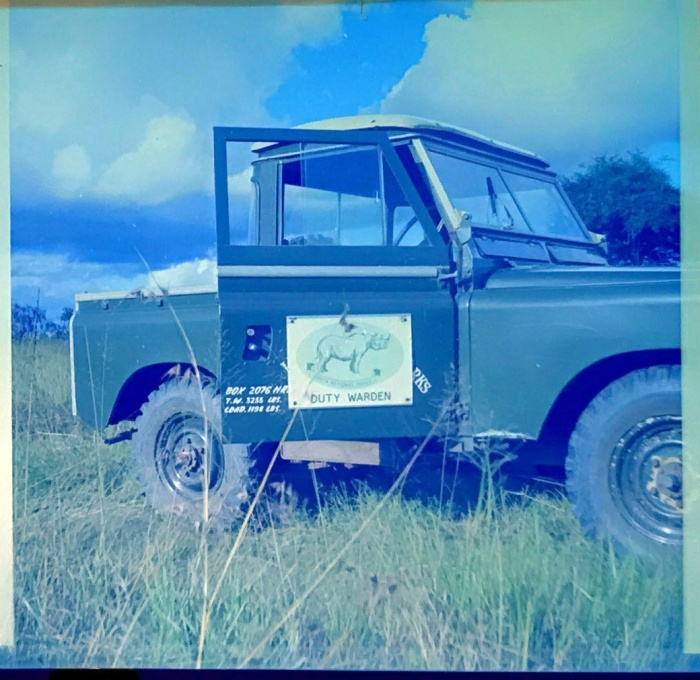 Game warden Land-Rover. Amboseli, 1968. That was half an hour before we saw the lioness. Several cars got stuck in the mud. Grown-ups had decided to go on safari during the rainy season. Bad idea. Warden came to help tow the cars out of the mud. We did walk a few hundred yards in the grass, to allow the cars to get out of the mud. What happened to “don’t get out of car”? Er… we didn’t think there was a lioness so close… 🙂 (Isn’t that Land-Rover a beaut’?) 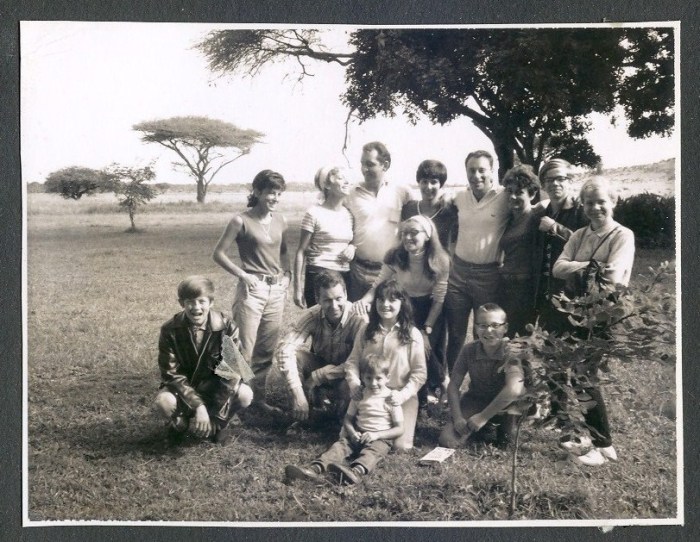 On safari. With our expat friends. Some were United Nations, one was the local manager for Total Oil company. He eventually became the CEO worldwide. The other one, I don’t remember… (Always label your photos, as I have said countless times…) Little sister and I are to the right. 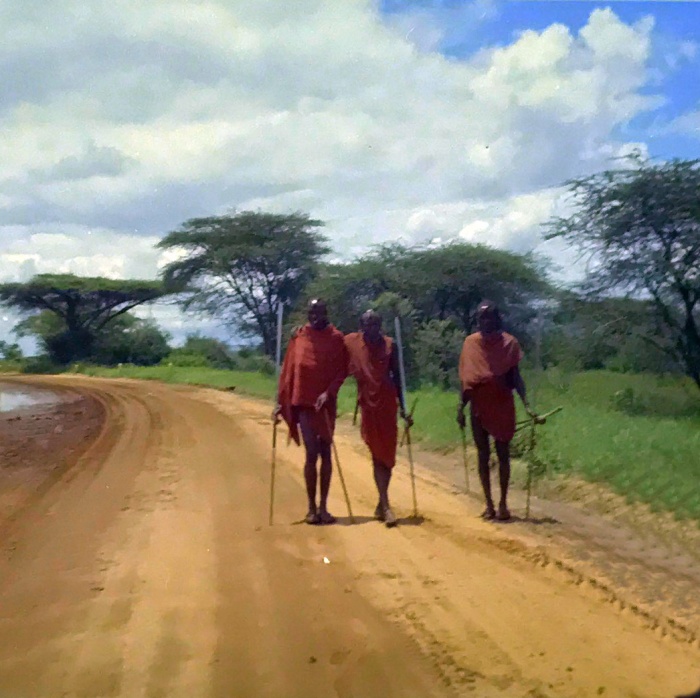 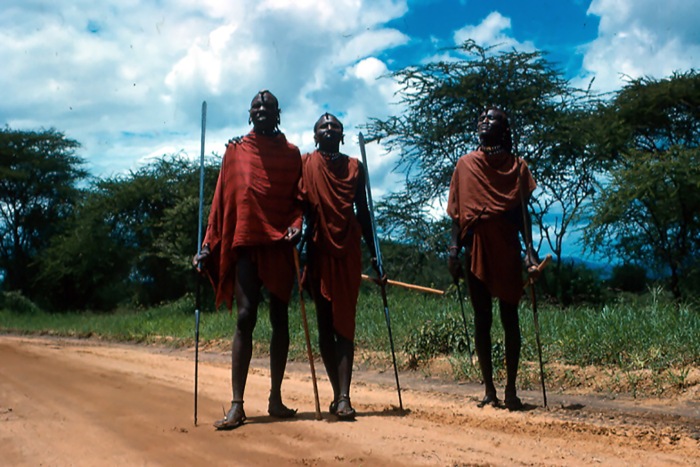 A better shot. As I have mentioned in other posts, the Maasai are one the very few tribes who have maintained their traditional way of life. They are cattle herders. They believe al the cattle on Earth has been given to them in custody. I understand they make decent money selling some of the cattle to the Kenya meat commission. 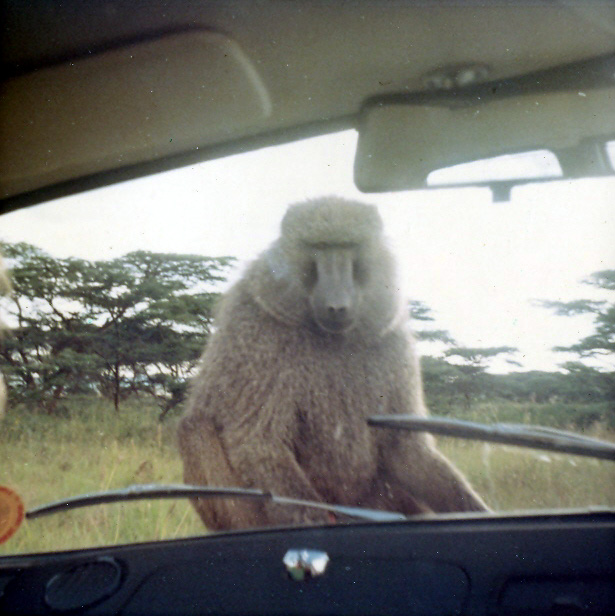 Vervets are ok. Manageable. Don’t mess with baboons. This one looks cute, sitting on the bonnet? Don’t trust him. See my personal views on monkeys in ‘The monkey incident’: 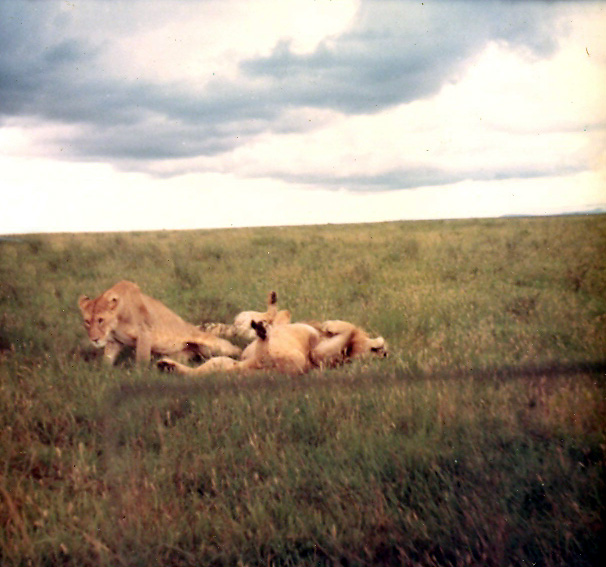 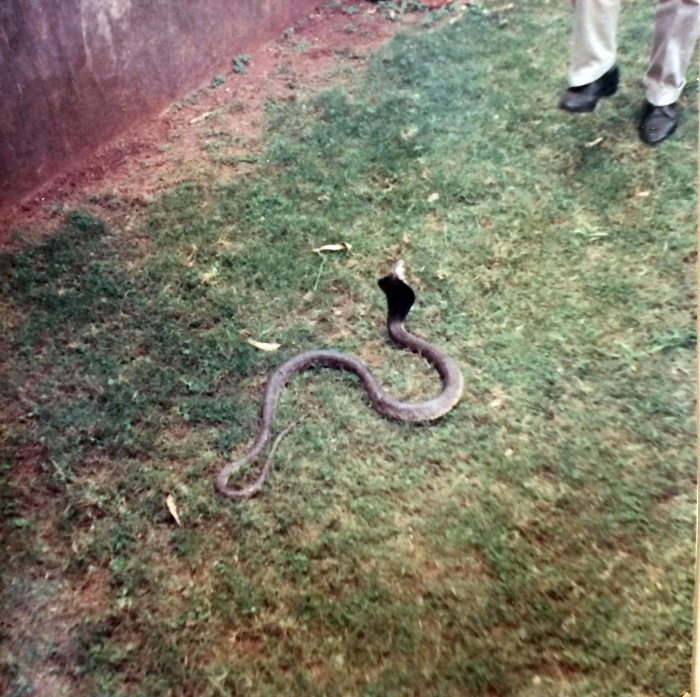 Cobra at the National Snake institute. The feet to the right belong to Dr Ashe. c.1968. Nairobi, Kenya. 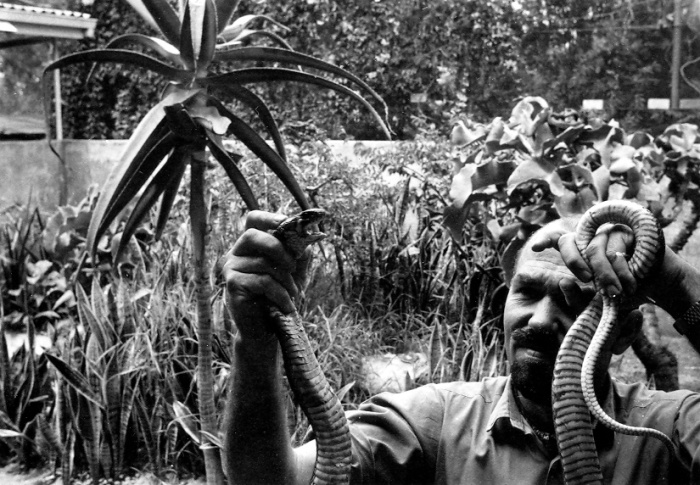 Dr James Ashe has caught the cobra. Bare-handed. Ashe was a pro but a bit of a show-off. 😉 He was a snake specialist. Cobras and other venomous snakes were caught in the wild and “milked” of their venom to produce antivenom serum. Dr Ashe died in 2004; his widow created the James Ashe Antivenom Trust to save people from snake bite. More than 100,000 die every year of snake bite the world over. See here for more on the James Ashe Antivenom Trust: 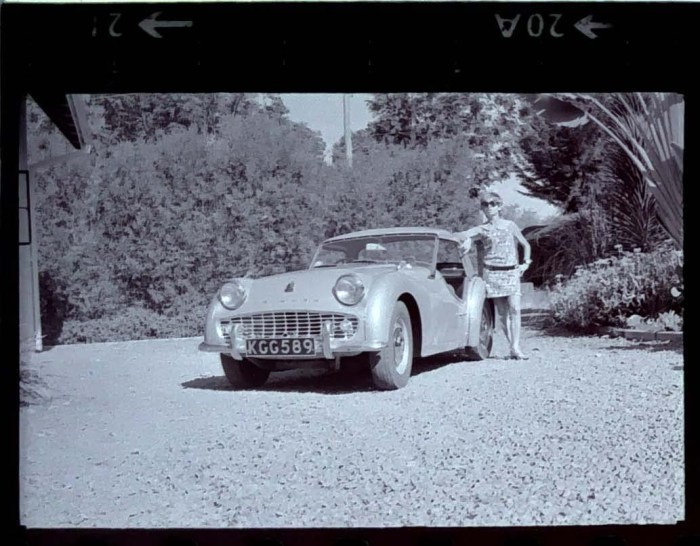 Last but not least: THE car. My mother’s Triumph TR3. In the driveway of our house in Lavington, Nairobi. c.1968. She wears a very Mary Quant, Carnaby street mini-skirt. Went back to the house 20 years later. Still there but fenced and gated… Hello darkness my old friend. ‘Violence’ like a cancer grows… 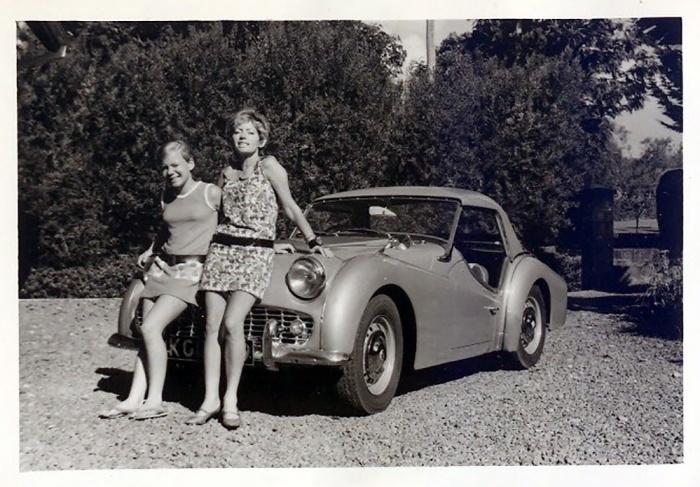 *Part of the Mzungu** chronicles.

**Mzungu, plural: wazungu. Mzungu is a Bantu (Swahili) word used throughout East Africa from Uganda to Kenya to Tanzania to Zambia and in the great lakes region, from Rwanda, Burundi, to Congo Kinshasa. It means “white man”, or woman. The origin of the name dates back to the 18th-19th century, when European explorers came to East Africa searching for the source of the Nile, the gold mines of Solomon, or the Mountains of the moon, what have you. It literally means traveller or wanderer. Africans then, could not understand why Europeans could not stay in place, why they had to move all the time.  They thought Europeans were a tad crazy.

Asante sana, thank you, for joining this trip down Equinoxio’s memory shuttle.  I may have posted several of those pix before. Sorry. Kwaheri sassa. See you soon.