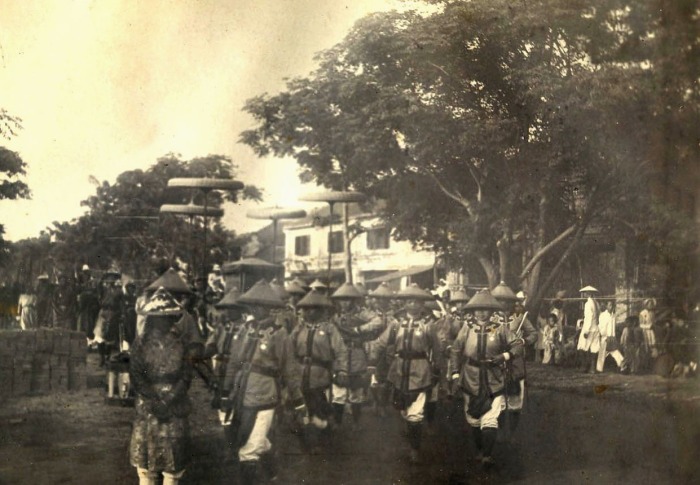 Hué. One of Than Thaï’s follies, several of his wives in ritual dress are transformend into musicians, wearing a Marine fusilier’s belt.

Hué was the imperial city of Vietnam between 1802 and 1945. The capital of the Nguyen dynasty. (Nguyen is a very common surname in Vietnam. Much like Smith!) Emperor Thanh Thai was crowned in 1889; some call him the Vietnamese Caligula, with a “well-stocked Harem”.  Hence the legend above of “several of his wives”. The first emperor to cut his hair short and drive a car, after repeated stories of servants and women abuse, he was sent away “on a vacation” by the French and deposed in 1907 on the grounds of insanity. (Source: the mad monarchist).

Hué will be remembered by Americans (And Vietnam vets) as the site of one of the fiercest battles of the Vietnam war, in 1968, during the Tet offensive. 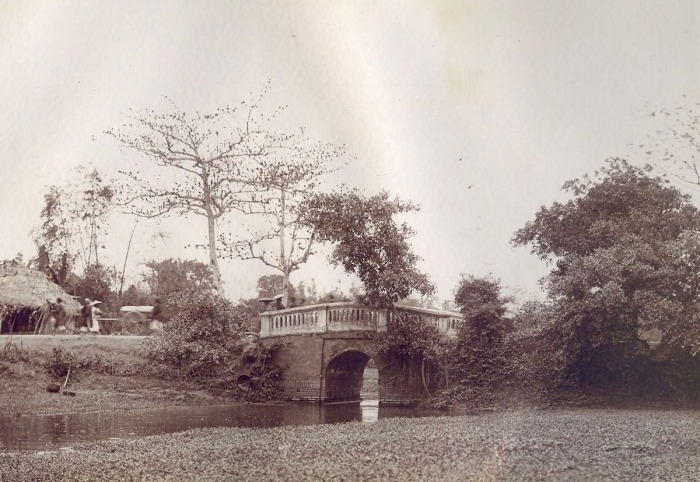 The paper bridge close to where Rivière was killed.

Henri Rivière (1827-1883) was a French Navy Commander. During the French-Chinese war, he conquered Hanoï in 1882, against his superiors’ instructions. At that time, Vietnam was more or less a Chinese posesion. The French, as I mentioned in part 1, were trying to block British expansion from India to China and came head to head with the Chinese. Rivière gained the French the province of Tonkin, north Vietnam (where vietnamese independence leaders later came from, e.g. Ho-Chi-Minh) The Black flags, a group of Chinese bandits and brigands were enlisted by the Chinese to attack the French. Rivière was killed in combat close to the paper bridge shown in this picture. 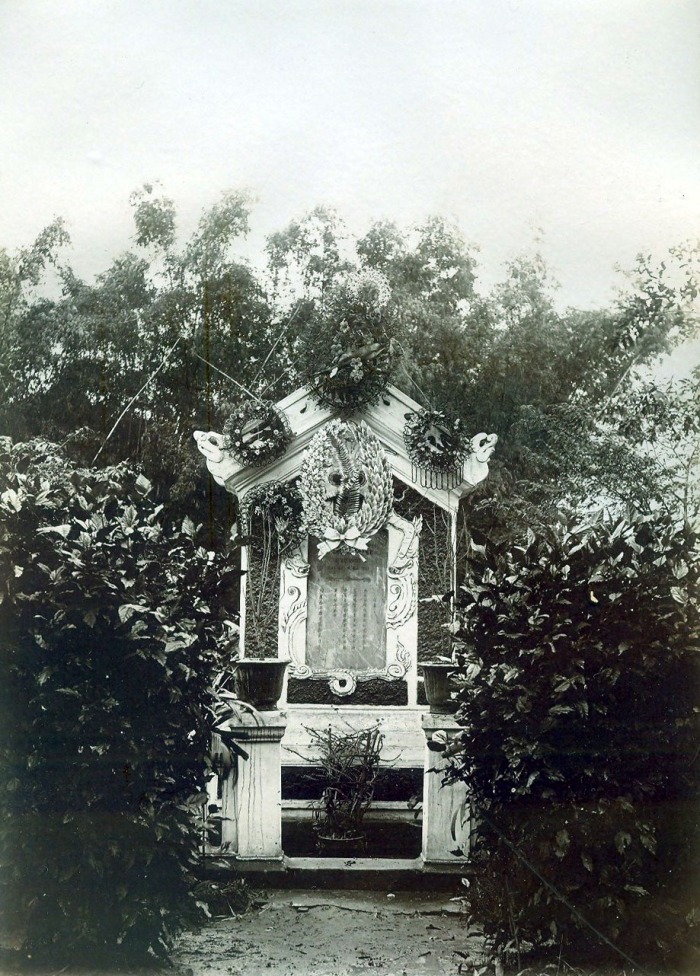 Monument to Henri Rivière at the place he was killed. 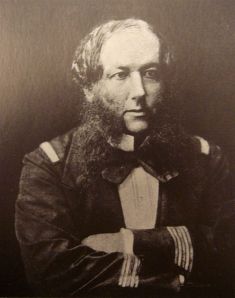 The war between the Chinese and Black flags on the one hand and the French on the other, went on for a few years, until China abandoned its claims on Vietnam and left it to the French. I have a feeling the vietnamese were not consulted.

Circa 1902. “Civilisation” in progress. Paul Doumer was at one time Governor general of Indochina. He later became President of France in 1931 until his assassination in 1932. The bridge is now called Long Biên bridge. 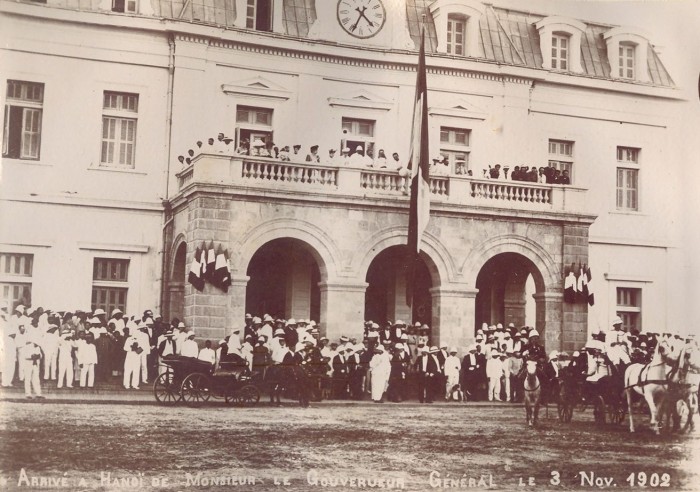 Arrival of the Governor General at the station. 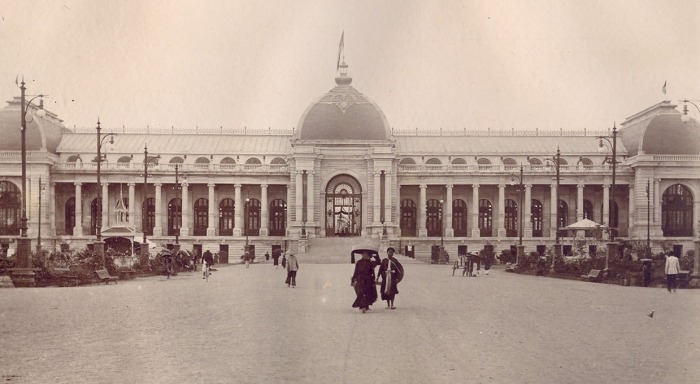 The turn of the 20th century displayed a great fad for “Universal fairs” or expos. The Eiffel tower was constructed for the 1889 World fair. And meant to be destroyed at the end of the fair! This particular Fair in Hanoï in 1902 diplayed all the proud possessions of French Indochina and invited Asian countries. The architecture is similar to the Grand Palais in Paris. Though the author mocks the construction without sufficient foundations! 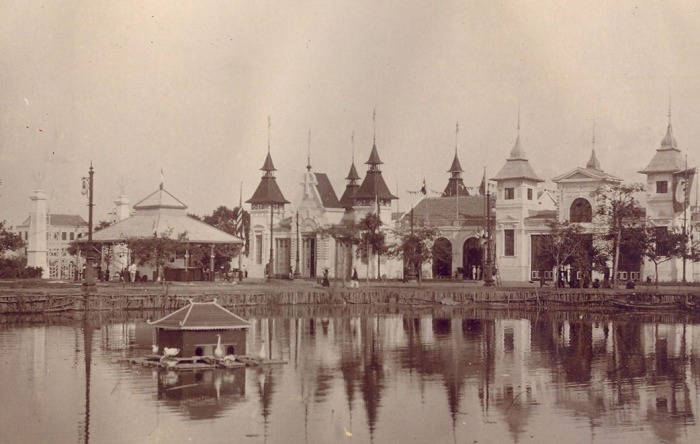 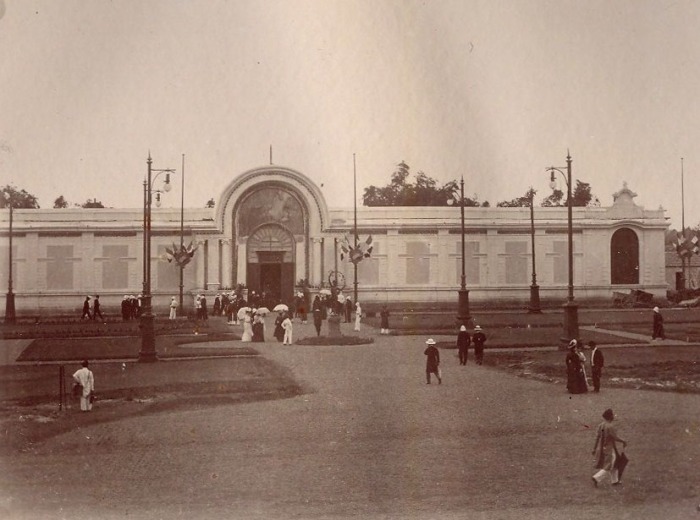 “Croûtes”, crust, also means “bad painting” in French. The author’s sense of humour. He also mentions in another photo, the French pavillion with displays of food, saying: “on ne déguste pas”. No tasting. I like the character bottom right, with the traditional vietnamese dress and the umbrella. 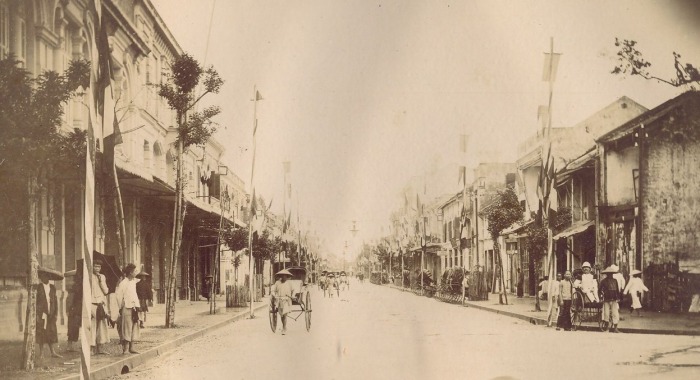 A street of Hanoï c. 1900. Note the rickshaws, center left, and the French officer in white to the right. 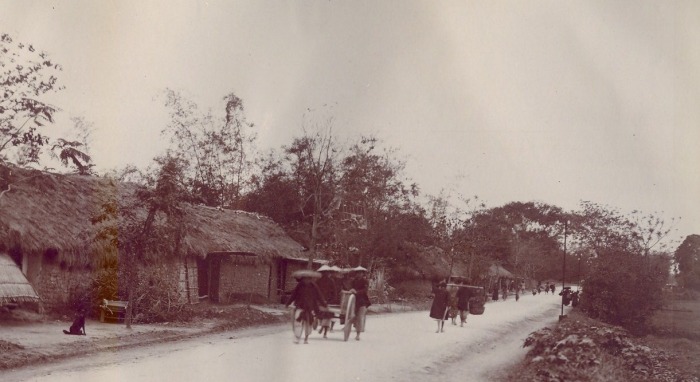 All I could find on “Son Lai” is in vietnamese. Don’t do no vietnamese, sorry. There was however a fierce battle in “Son Tai” between the French and the Black flags in 1883. Century old pencil handwriting is difficult to read. 😦 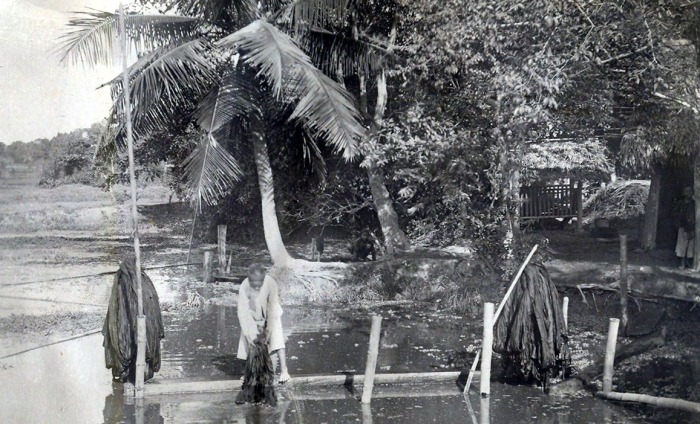 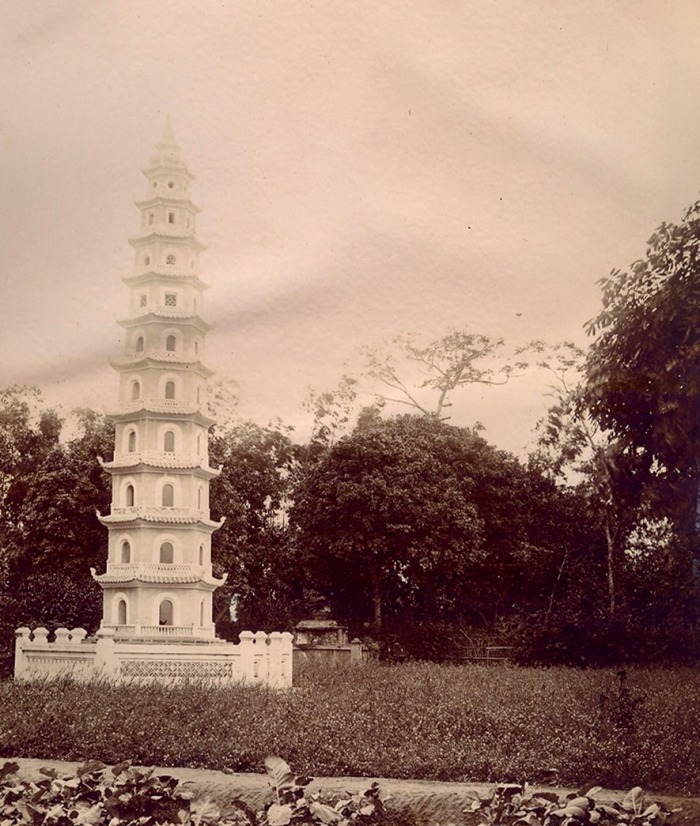 The closest to Bach Mou I could find was “Bach-ma”, white horse, a “Chinese despot who conquered Indochina”. (Source: Chinese mythology dictionary) 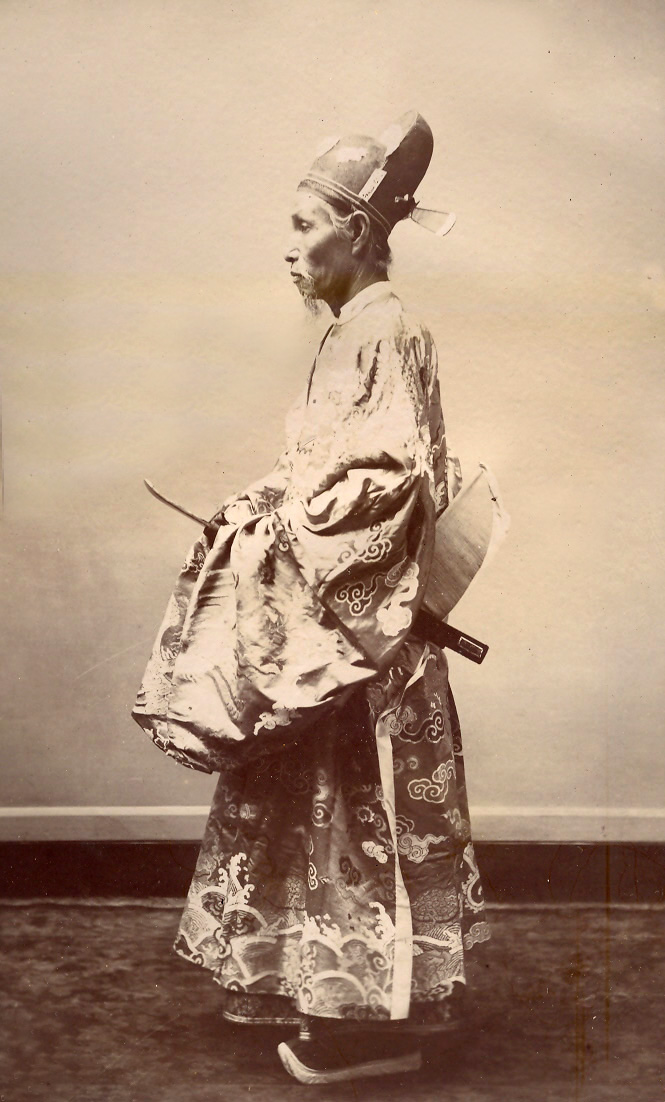 Vietnam, of all Indochina, had always been under the strongest Chinese influence (and domination). Vietnam was a Chinese province from 111BC to 938AD,  the first of many occasions!) Thus the vietnamese followed many chinese customs, one of which was the Mandarinat. High ranking civil servants – Mandarins – in China were recruited on the basis of extremely difficult literary exams for more than 1300 years, from 605AD to 1905AD, the end of the Chinese Empire. This particular vietnamese Mandarin is dressed with the typical chinese costume of his rank. See the bonnet, the higly decorated robe, and the chinese style shoes. 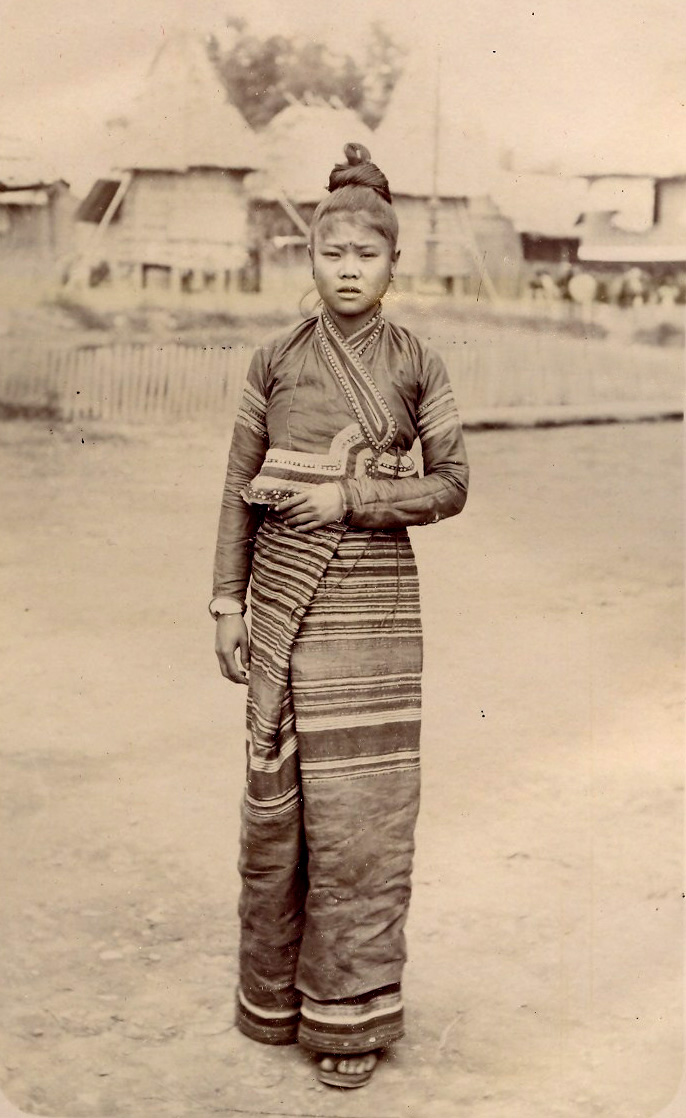 The Kha are a hill tribe of Laos and the Dar Lac province of Vietnam. The original proto-malays or indonesian inhabitants of Indochina. They are related to the Moi. And maybe the Meo? There seems to be some confusion with the Akha tribe. I have found this modern picture that may be from the same tribe (source included): 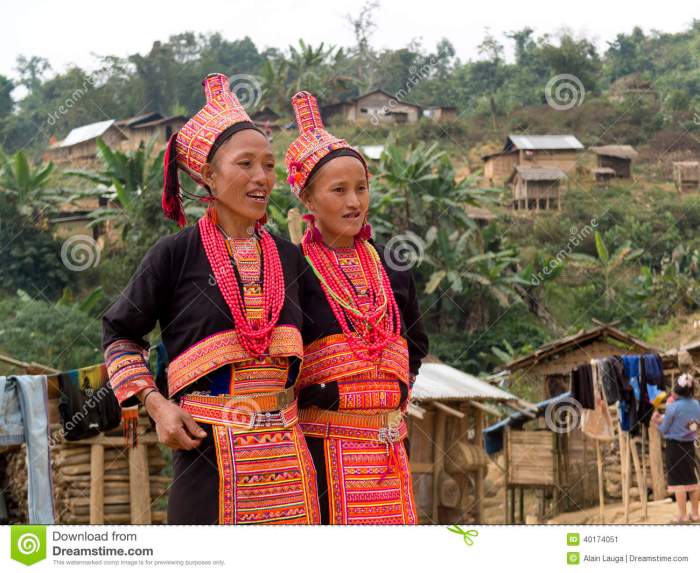 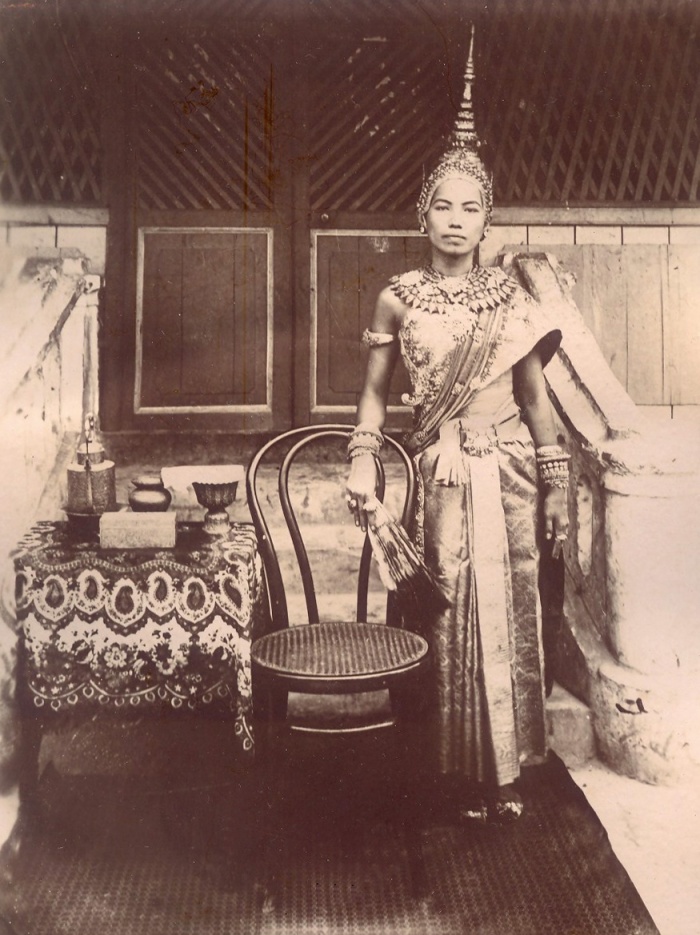 The head-gear, costume and jewels look very Thaï. Still used today in Thailand and Cambodia, I believe, for traditional dance. Such elegance! 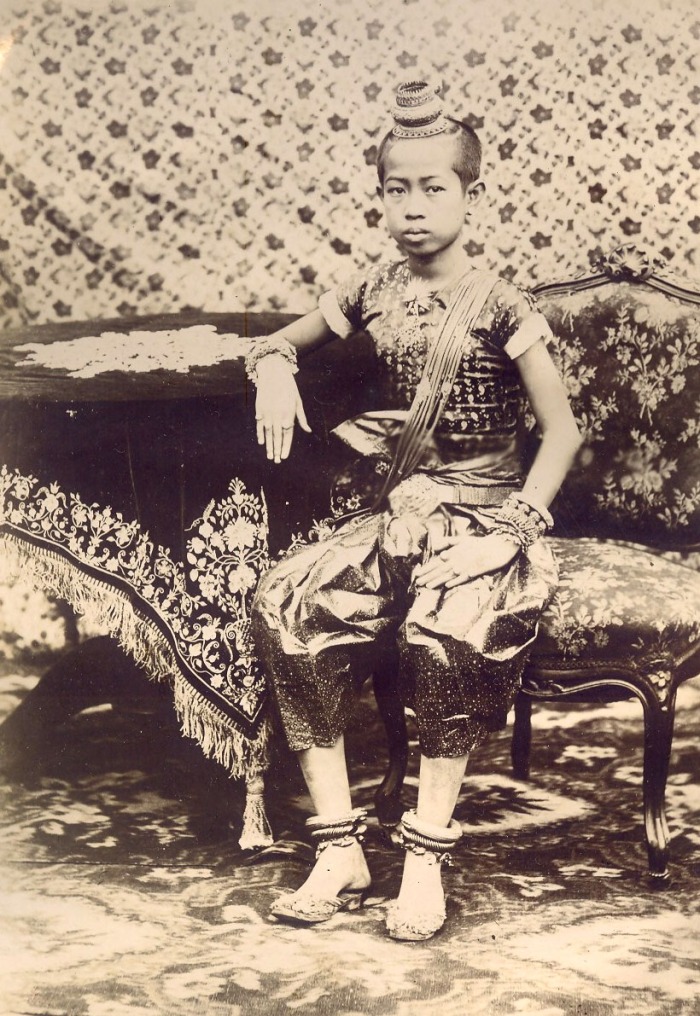 Note the tiny crown and the shorn hair. (Again! Would our guests from Cambodia care to explain this mystery?) Superb jewels, silk costume and ankle bracelets. Also wearing mules! This little princess can’t have been more than twelve. Probably – and fortunately – died before the Khmer Rouge massacres. But then, don’t princesses live happily ever after?

Thank you for your time.