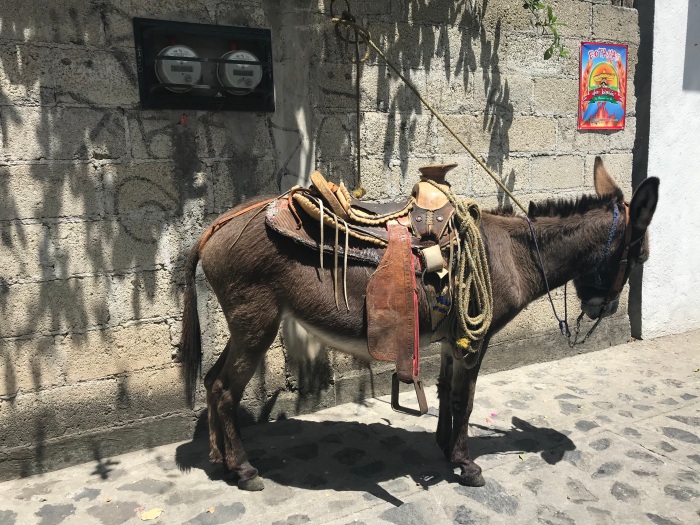 We jumped bail. Violated parole. 3rd week of July, after 4 months in lock-up, we rented a house 2 hours West of Mexico city. A charming town called Malinalco. Hopped back into the 19th century. Never seen a donkey with such an elaborate saddle. Reminded me of Dr Elena Prewitt, female black professor of LAW at the “Univershity of Alabamer, Tuscalooser”, late 70’s. (Roll Tide). Best Law teacher I ever had. She once told us: “If one person calls you a mule, you can laugh. If three people call you a mule, go buy yourself a saddle.” 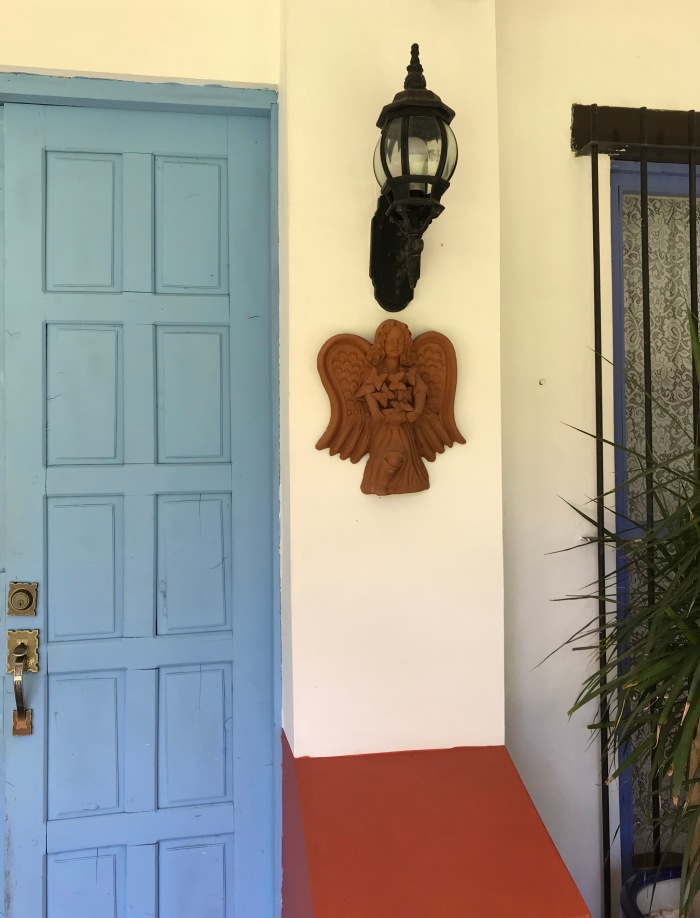 A house with a view:

We basically stayed inside for the whole week. Why take unnecessary risks? Still, we “escaped” twice into town. Masks, gel and all.

Hibiscus flower in the garden. They always remind me of our garden in West Africa. Possibly one the very first flower names I learnt.

We had our fair share of good craftsman beers. 🍺🍺

This one was “Aye-tay-lian.” (Beer of the world series)

There was a very Kitsch beer tray at the house. A reproduction of a Kitsch “Aztec” princess by José Bribiesca. Original is at Carlos Slim’s Soumaya museum. (Slim is one of the world’s richest men. Made his fortune in Latin America, not one the world’s richest regions by far.)

This picture is dedicated to “Be Kitshig”, the Kitschiest blog I know:

“Todo está en todo.” All is in all. A ‘profound’ thought on the streets of Malinalco. 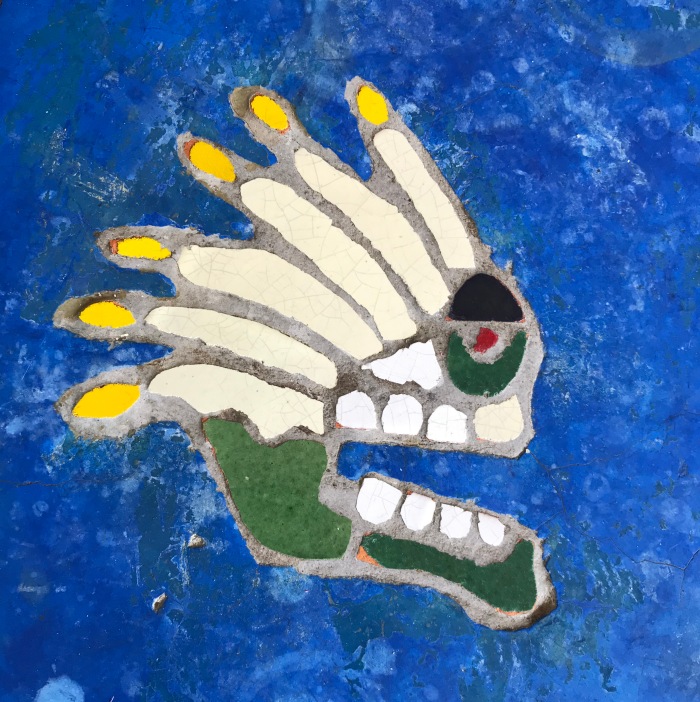 An Aztec skull? With feathers? 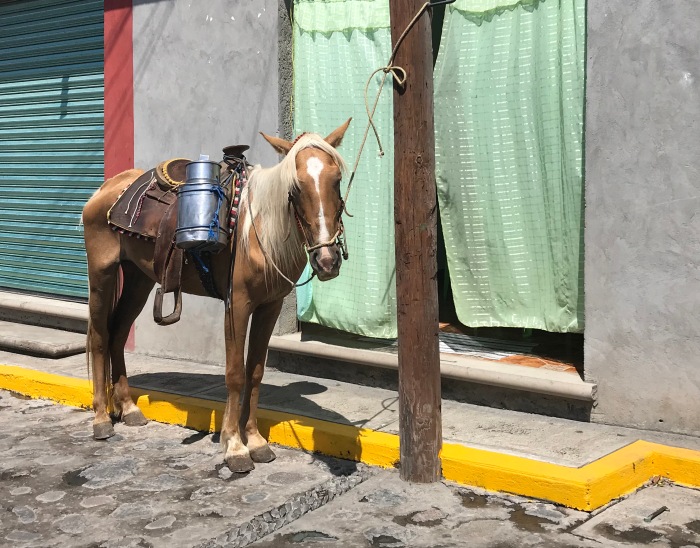 The milk-horse. In this 21st century, the farmer still milks his cows, comes down from the hills with two full canteens and sells the milk in the village. Note the colour of the horse’s mane and tail. In French we call it “alezan doré”. (“Chestnut” in English? Sounds lame.) A Palomino rather. Thanks to Dale… 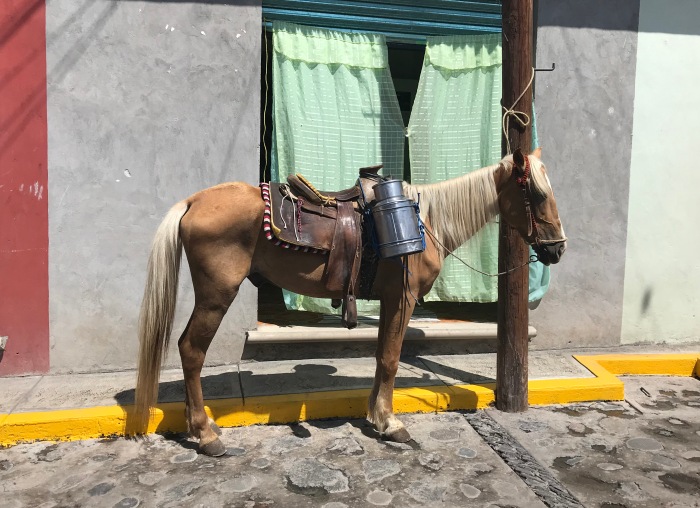 This was a very pretty little horse, or rather a pony. I don’t think it was higher than 10-12 hands. Note the elaborate saddle work. Also note this poor thing is famished. See the hollow at the top of its leg, behind the saddle? A well-fed horse flank and thigh should be round.

San Diego chapel. 16th century. Malinalco. (As the rest of the pictures) (Malinalco, not 16th century)

The Lady with the snake. I wondered who she might be, but seeing the moon now makes me think she could be a modern representation of Ixchel, the goddess of the waning moon. 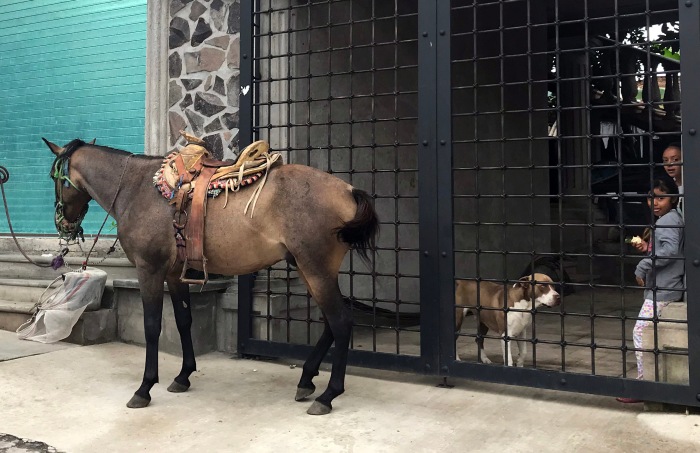 Pretty horse and pretty eyes… (Look to the right…) 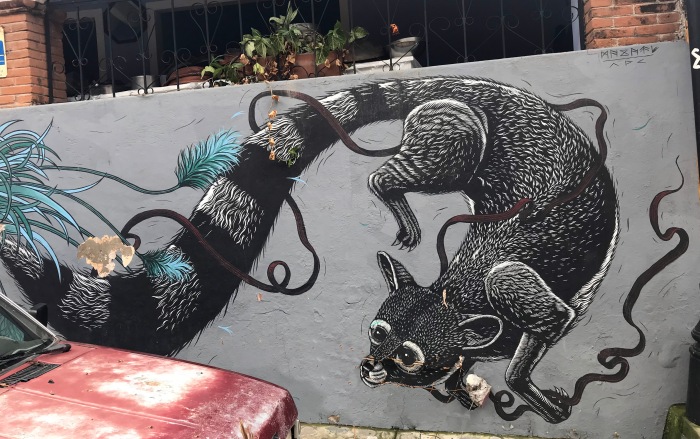 Why do people always park their car in front of street art? That little cutie is a cacomixtle. They’re a very cute cousin of the raccoon. About 2 ft long with the tail, they have adapted well to humans and can even be found in Mexico city. Unlike their cousins, not aggressive at all. “Perty little thangs”.

This post is also dedicated to a fellow blogger who spent some time in Malinalco. Melanie Franz is a great artist. Love her “Mr. Fox”. Visit her blog at:

Thank you for jumping bail with us. As I write this post, Mexico is now ranking third, worldwide in terms of deaths… So we’re back in “the joint”. Can’t tell how long this will last. Meantime? Stay safe. 🙏🏻😷