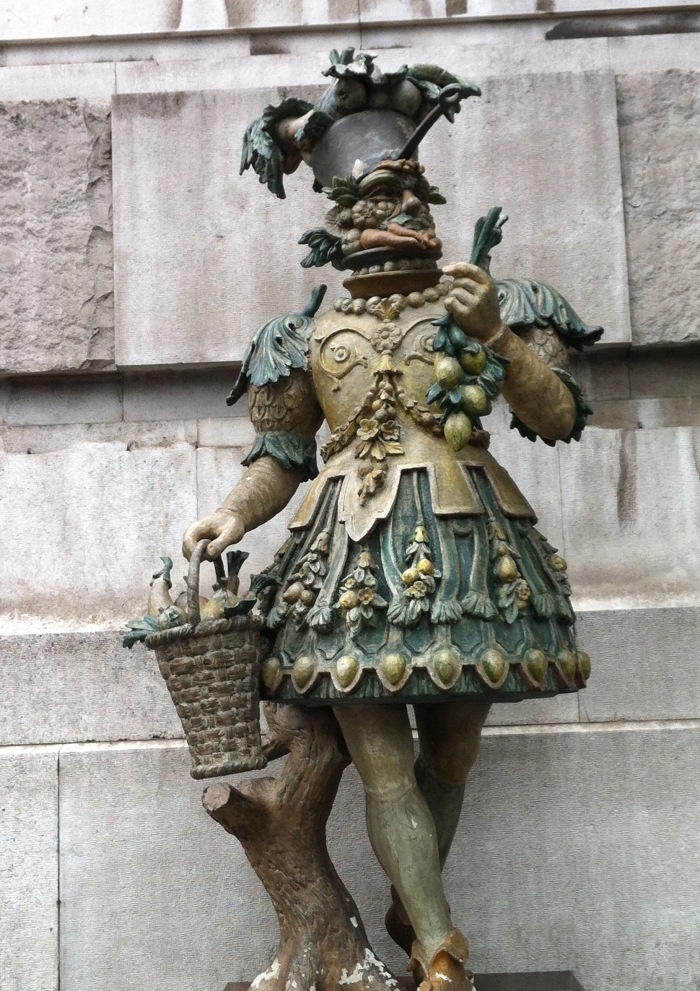 Andiamo. Let’s go. “Andiamo” is possibly the first Italian word I ever learnt… Italian is a bit of a mystery to me. Never took a single class. Never lived in Italy. My parents had a few Italian friends in West Africa. I remember Ambassador Sciascia. Who spoke perfect French. Did I pick Italian in the corridors of the French Lycée in Addis-Abeba? What Italians call Abissynia? At least five languages were spoken there. Or listening to Bobby Solo’s “Una lacrima sul viso?” Or Adriano Celentano? At any rate my broken Italian is way better than my German. ‘Nuff said.  Let’s roam the streets of Italy again. Above: the train station at Milan, 2014. Andiamo.

La prudenza, by Donato Creti. Bologna. Prudence is the mother of all virtues goes the saying. 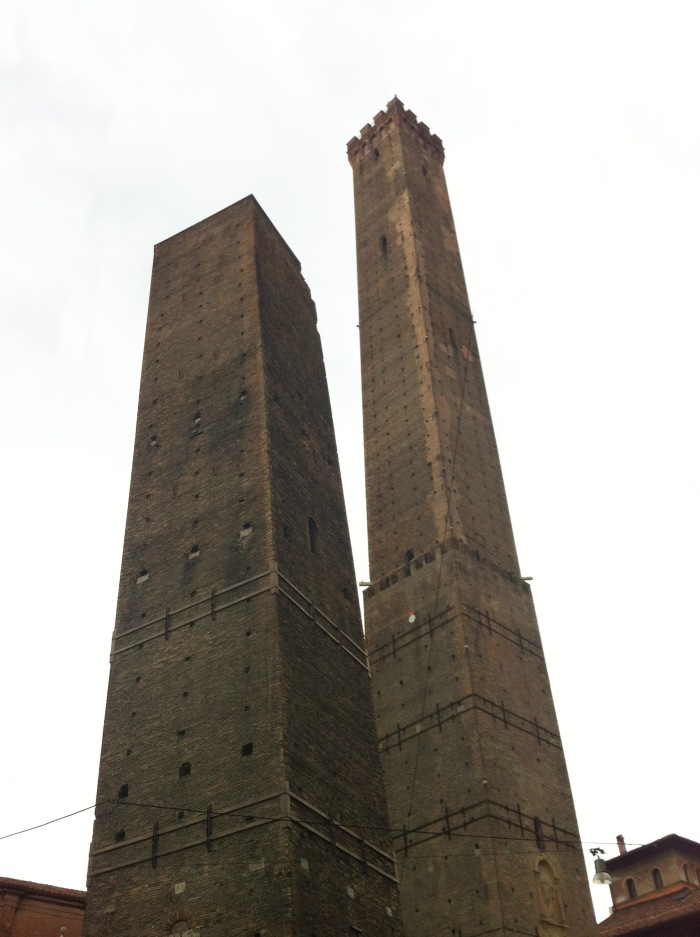 The towers of Bologna. What I would call a pissing contest. There were up to 180 such towers in the city around the 1100’s-1200’s. I’ve read many theories, but I suspect the richest families just wanted to show off who had the highest tower (hence the more money)… (Think Trump building…). Only two are left. Another city in Italy still has many towers. Lecco? Help me out, “amici”. 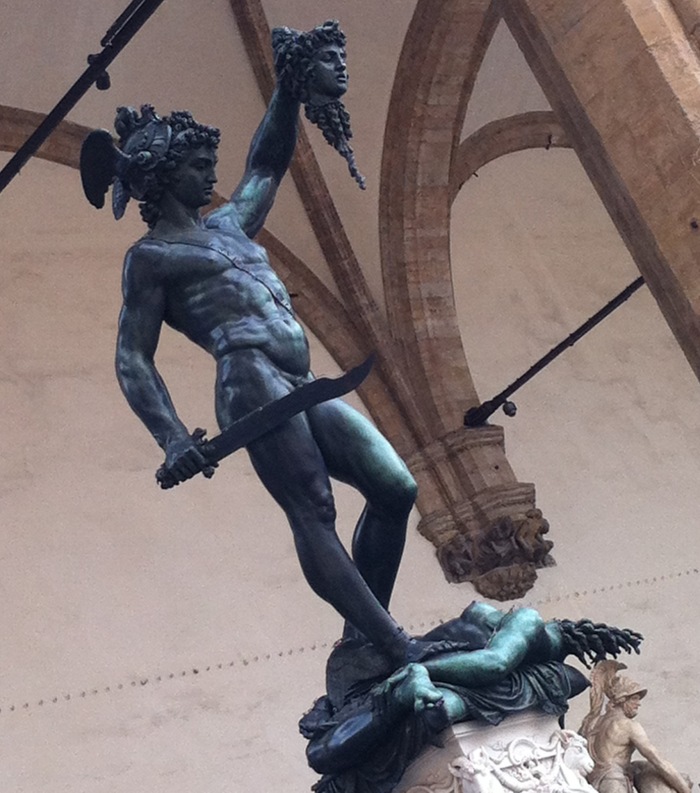 This one is for Manja Mexi. https://mexcessive.photo.blog/ We discussed who was the sculptor the other day. I thought Donatello, I was wrong. This is Perseus, holding Medusa’s head, by Benvenuto Cellini. Set in 1554 on Piazza della Signoria in Florence. (Need to go back to get a better shot of Medusa…) 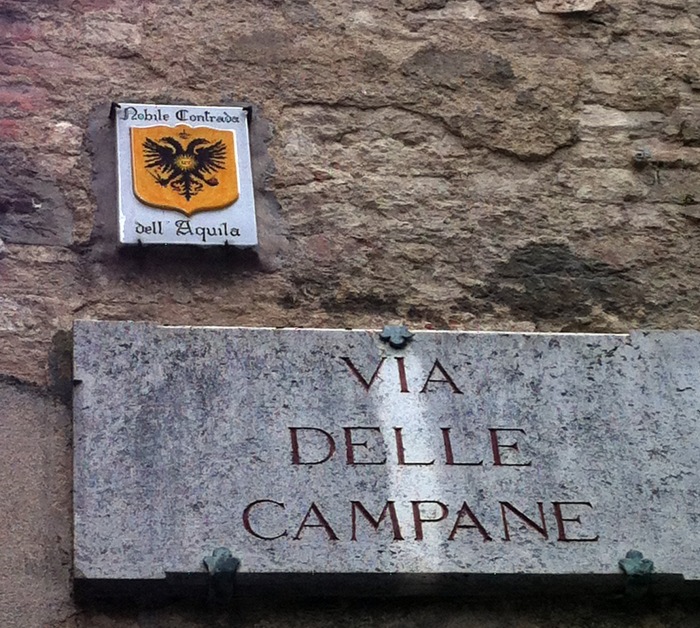 Sienna, in the Contrada dell’ Aquila. Street of the bells. The neighbourhood/ward of the Eagle. Remember the age-old rivalry of neighbourhoods on Sienna which culminates in the annual horse race around the Piazza del campo. Twice a year, my bad, in July and August. I guess they will be postponed this year… 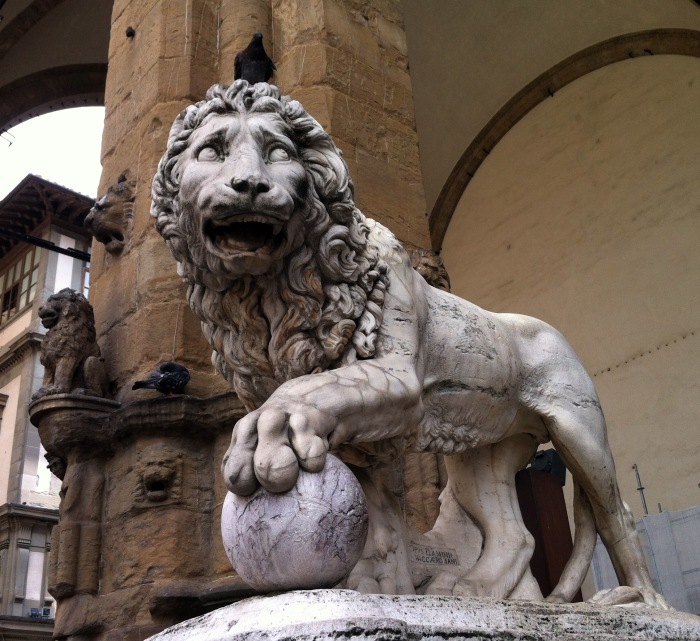 Back to Florence. Next to Perseus’ statue. Having seen many lions in the wild in Africa, I always wonder about Europe’s fascination with distant lions. The closest lions to Europe at that time were in North Africa or Persia maybe? Regions with little communication with the West then…

La torre del mangia, on Piazza del campo, Sienna. This tower took years to build, between 1325 and 1344. Again a contemporary of Notre-Dame… Just heard work has started again at Notre-Dame… Can’t imagine how it will go with social distancing and the “Inspection du travail” watching every move… 5 years, Macron said?

Fountain of Neptune, Piazza della Signoria. One could easily stay there for an entire day, or week, to take in all the details… Maybe a month? The statue (1565) is the work of Bartolomeo Ammannati (and staff). Charles IX, son of Mary of Medici, was King of France. James Stuart, son of Mary Stuart, was King of Scotland and England.

Door-knocker. Somewhere in Italy. (Sort of misplaced my notes… Does it really matter?) 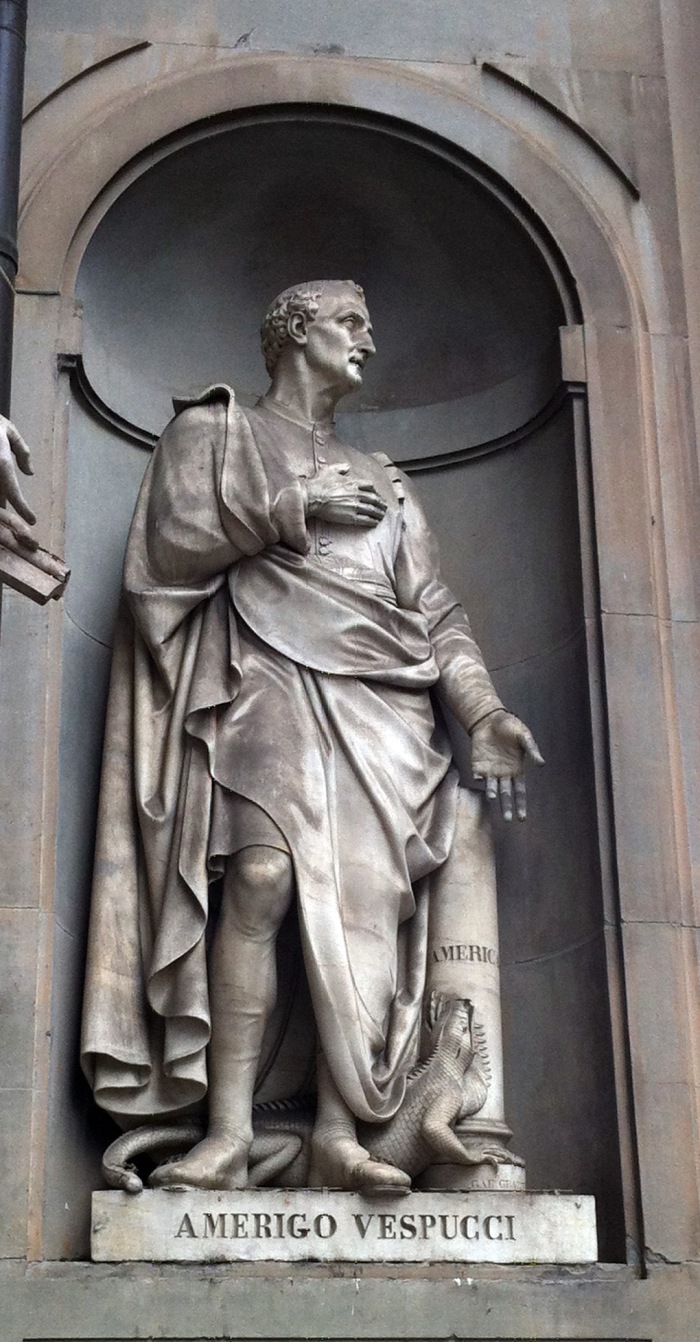 Amerigo Vespucci (1454-1512), Uffizi, Florence. One of many famous sons of Florence he gave his name to the continent Colombus has discovered. His cousin was married to the lovely Simonetta Cattaneo, favorite model of Botticelli. 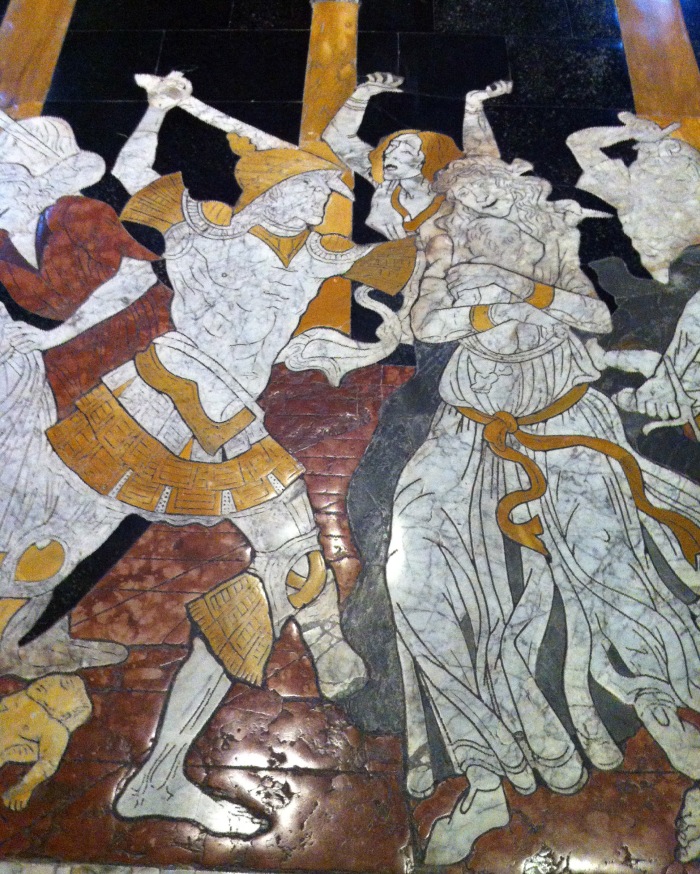 The massacre of the innocents. On the floor of one of Sienna’s prettiest churches… Which was it? Hang on… Saint-Wiki come to my help…The cathedral! Never seen anything like that. There’s the cathedral: 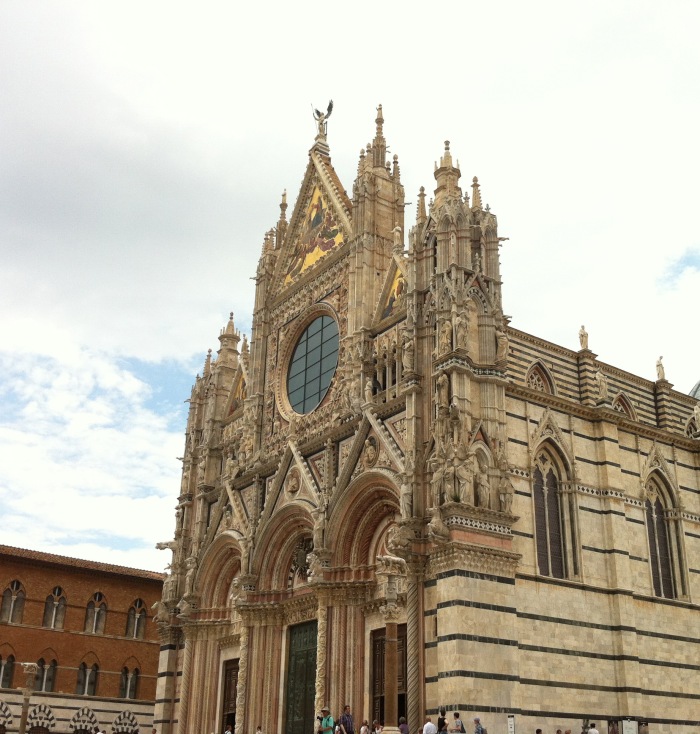 Sienna cathedral. Late 1200’s. As beautiful as the building is, the floor inside is unique.

One of many motifs on the cathedral’s floor. I thought they might portraits of noble (men and) women buried there as was often the case. This one apparently is called “The Sibilla (prophetess) of Eritrea.” c.1482. Eritrea was part of Ethiopia for a long time. Until they got their Independence after a long bloody war. Eritrean women were easily recognized in Ethiopia by their special hairdo. Wonder whether they still use it.

Fountain in Sienna. Rome’s mother wolf who raised Romus and Romulus is very present in Sienna. Wonder why. Sienna was fiercely independent, but maybe closer to Rome? Again, my Italian friends, your input will be most welcome…

Same fountain, Sienna. Italy is a paradise for fountains. 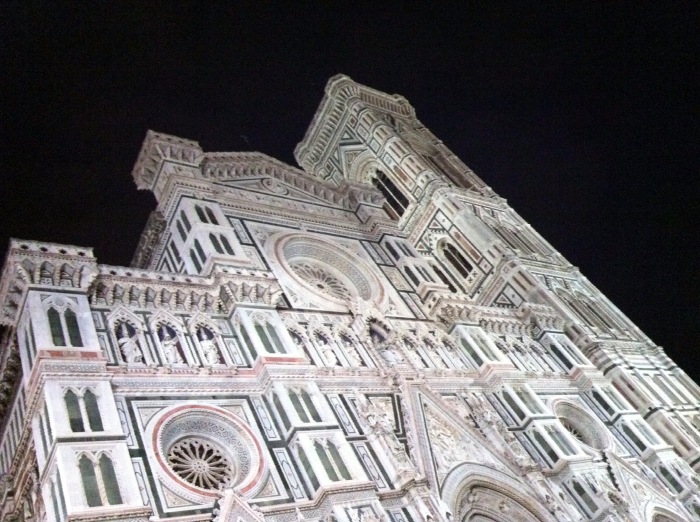 Sienna cathedral. Couldn’t find the reference. Sorry. The Lady could read and write. many men didn’t. 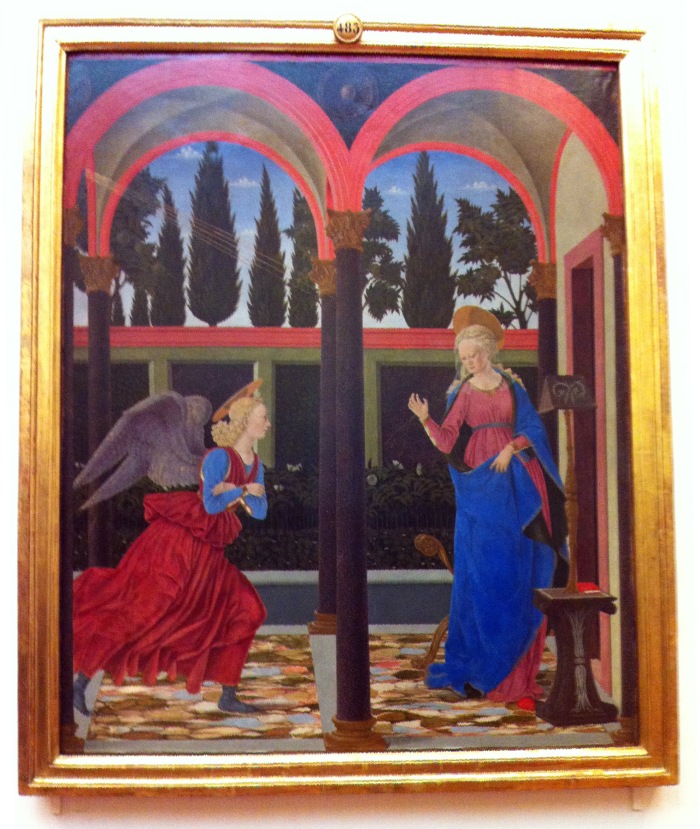 The Annunciation by Adolfo Baldovinetti c. 1457. Five centuries ago. I sometimes wonder whether we have progressed that much… Or a t all? Uffizi, Florence.

A not so well-know but beautiful Greco. Uffizi, Florence. Anyone been to Toledo?

And a small Rembrandt. Uffizi again… The Uffizi is like the Louvre, a place to hide in a closet before closing time, and spend the night wandering… 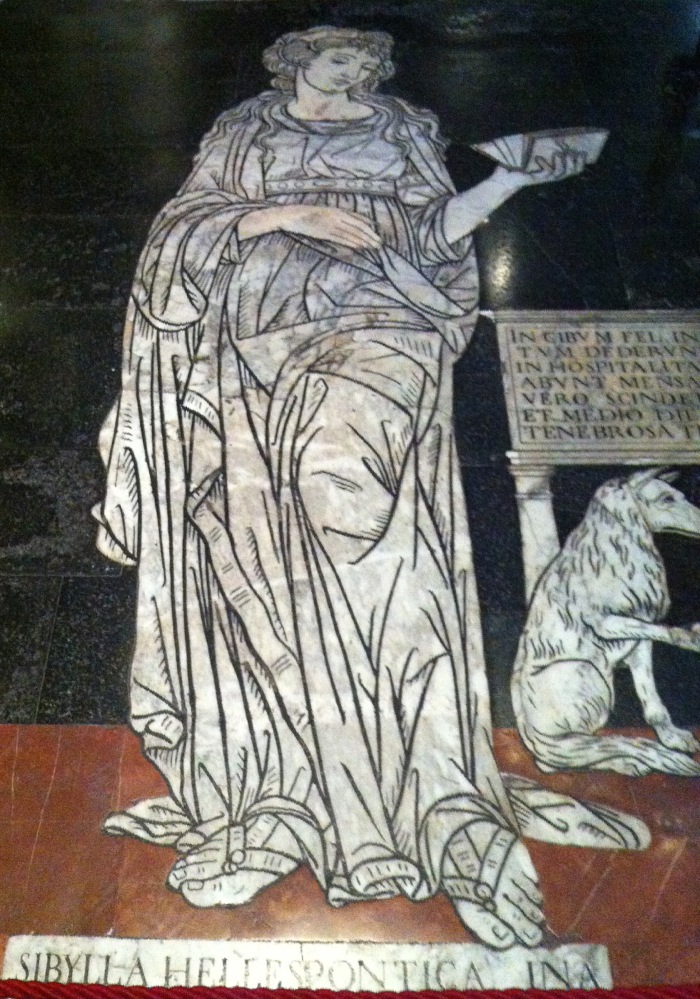 Sybilla Hellespontica, Sienna cathedral. c. 1483. Artist: Neroccio di Bartolomeo di Landi. Hellespont was the ancient name of the Dardanelles detroit separating Europe from Asia in what is now Turkey. It was a key strategic place. A place of singular importance for Aussies and Kiwis. Note the dress, very similar to Botticelli’s models in the birth of Venus or the four seasons… 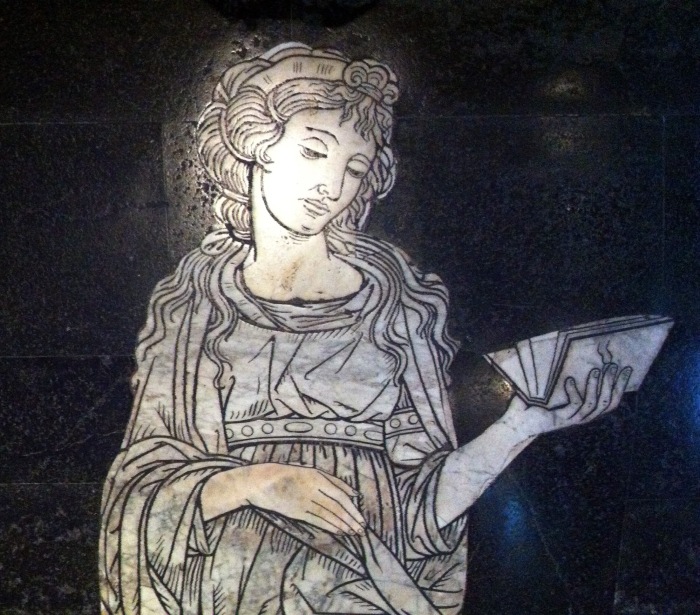 Detail of the above. Ageless elegance.

Grazie, thank you, merci, for flying Equinoxio’s Time-Space shuttle. Italy (and France) have gone out of lockdown.  Figures look good for Italy, who came out first on May 5th. France has had two small peaks. To be watched closely. They’re the “models” for other countries. In an empirical sense. The US, I understand, is reopening. Tread with caution. Particularly with Dr Strangelove living in Penn Avenue. Hang in there. Stay safe. 🙏🏻😷