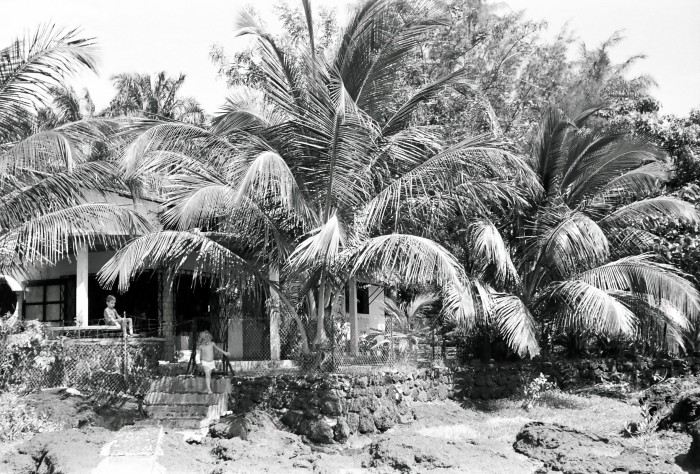 The magic house, Conakry, Guinea, West Africa, c.1962. I’m sitting on the table, pondering the day’s next play. Little Sis walks down the stairs with her cast on her arm. Keep a safe distance lest she clubs you. The house may be long gone, the African village at the back has been replaced by rows and rows of concrete buildings, the dirt road is now a 4 way lane. But on Google Earth one sees there are still houses on the coast lines, some with a swimming pool. Silly. Why a pool when you have the open sea all for yourself? I Google Earthed a few years ago. Haven’t wanted to since. I guess one could probably Google Street. What for? There’s another, fancy house instead of “mine”? Who cares? Let the magic remain. 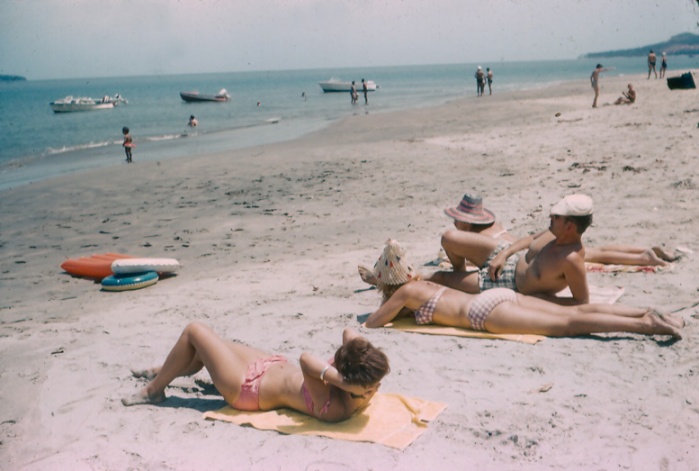 On the beach on the island of Roume. We generally went on Sundays for the whole day. Permits duly filed with the “Secret police”. (I joke you not). Maybe we were trafficking weapons to retrieve on the island and overthrow the newly independent government! L. to r. Marielle d’Orso, her parents, Suzy and Marcel d’Orso, and last, Marcelle Grimaldi. The d’Orso were childhood friends of my father at the Suez Canal in Egypt. Their parents and my grandfather were employees of the Canal. (Servants of the Empire from generation to generation) Marcel was the BP manager in Guinea, and delighted to re-unite with my father by pure chance.

Lunch. After the grown-ups and kids skied, some of the boats went trail-fishing between the islands. And brought back lunch. Just fish, grilled on charcoal in a hole on the beach. At the beginning of every dry season, the “officers” of the Boat Club sailed to the island, met with the chief of the village of fishermen who lived on another beach to the West of the island, and negotiated the yearly rent for 10 or 20 “concessions” above the beach under the palm trees. After much haggling and palm wine drinking a price was agreed and rent was paid. The villagers changed the palm-thatched divisions between each “concession”, scrubbed the wooden tables and benches, and voilà, we had our “private” place for 2 or 3 families for the entire dry season.

Avel mor II. After the first year when the only access to the islands was in the small wooden craft shown in previous posts, most families started buying their own outboard boats, first in aluminium, one hull, not too safe, then in fiber-glass double, unsinkable, hulls. There were outboard engines with magical names. Johnson, Evinrude. No Japanese engines yet. Avel mor means “Wind (of the) Sea” in Breton.

“Saleté de pétunia”, by Courteline (1858-1929) featuring, Godefroy, Madame Pisvert, sitting at the front of the “bus”, and the “Public opinion”. Courteline was a fun playwright of the late 19th early 20th. The young man to the left, Godefroy, holds a pot of Pétunias, in a bus.

Godefroy. To himself. “What do I look like? With this vase of Pétunia?!”

The Public Opinion: “This young man walks proudly in the path of virtue, the flower he holds on his knees, of his chaste soul is the symbol…”

The grown-ups put up five or six short Courteline plays. Direction by my father again, costumes by my mother. I think she sub-contracted some of the sewing. The entire production was lots of fun. 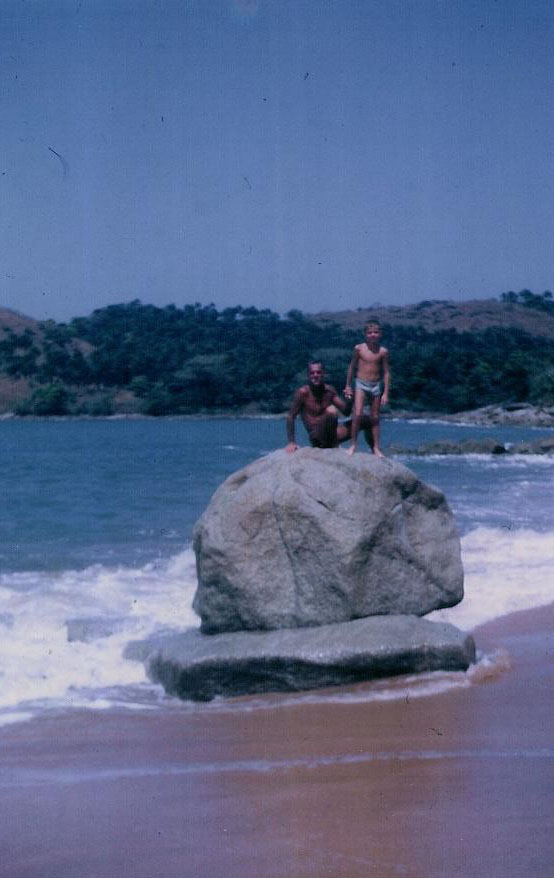 With my father, on Governor’s beach, on the other side of the island. Since that side was exposed to open sea, we rarely swam there, too much undercurrent. The walk across the island was fun tough, as we passed an old 15th or 16th century Portuguese fort dating back to the Portuguese settlements in Africa. For us, it was a pirate’s fort. Obviously. 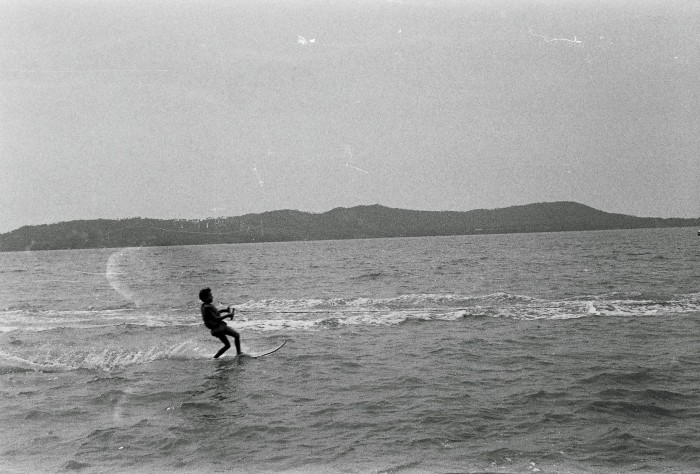 Yours truly, waterskiing. Roume island. I was 9 or 10? I hope those posts are not read as bragging. It was just normal life to us. 🙂 I did have my lifejacket on. After umpteen turns, I generally refused to drop the ski rope. You know: one more turn! And another. So after a while, my father had to kill the engine near the beach. My mother kept that ski rope (a perfect rope, two handles, much better than a single handle) all her life. Just in case she might ski again. I still have the rope in the family treasure chest. 🙂 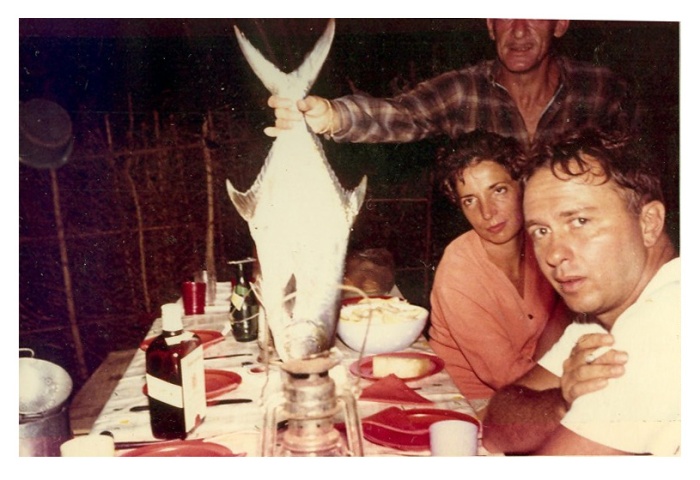 Seldom did we stay the night on the island. I jest you not, the “secret police” was a pain, one had to justify the purpose, grease hands, what have you. But when we did, we left the Boat Club on Saturday, spent the night on the beach, on small canvas foldable beds, not on the sand, there were lots of iguanas at night. And precious starry nights, with the crash of waves on the sand.

Tables were well laid. Plates and forks on the mantle. Salads and pasta had been prepared at home. Ballantine bottles were at the ready for the grown-ups. The oil-lamps were lit. My father is holding the dinner, a medium sized but heavy tuna fish.

Sitting, l. to r. are Laure Arnaud, wife of a French diplomat, and Bill Attwood, US Ambassador to Guinea . Bill was born in 1919, went to Princeton and served in WWII. A journalist and editor at Look magazine, Bill was a speechwriter for Adlai Stevenson. After Stevenson lost the primary, Bill joined Kennedy’s campaign and was eventually appointed Ambassador to Guinea in ’61. Found this picture of Bill Attwood with JFK and other ambassadors (source: JFK Library)

Attwood is at the far right. Those were the days when the Oval office held a higher class of people. Bill was fluent in French, and had a simple mission as all newly appointed ambassadors to former French Africa: 1) Kick out the remaining French interests in Africa so the US could move in. Remember Guinea had, and still has the world’s largest reserves of bauxite the mineral for aluminium. 2) Contain the Russian influence in Africa. The Cold War was raging on every corner of the globe.

“It was in Megara, suburb of Carthago, in the gardens of Hamilcar”. Salammbô, Flaubert.

This was to be the last production in Guinea and the islands. Our friend Claude Millet was a great fan of Flaubert and the grown-ups organised a massive costume party on the island, based on the novel Salammbô. The event was called “Opération Mégara”. We were all dressed at the “Antique”, Phoenicians, Greeks, Romans. Anything BC. An live cow was ferried to the island, then stuffed with chickens, in turn stuffed with… whatever, and put to roast on a charcoal fire, complete with Cook turning the cow over the fire. Unfortunately the cow was too big and never really cooked well. The stuffed chickens had to be taken out and roasted directly on the fire. Every production can have its setbacks.

Right to left above: my father, Cyril, my mother as Salammbô, Serge Elluecque, first counsellor at the French Embassy, Françoise, a friend of my mother’s as Cleopatra, Jocelyne d’Orso, standing in front of my sister, Anne Elluecque, Serge’s daughter, whom I finished High school with in Ethiopia later, and little me. 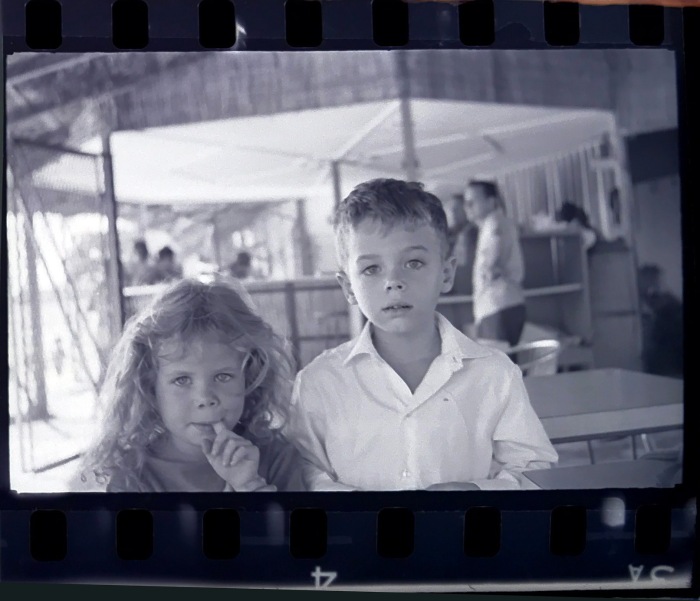 “Can we go home now?” Little Sis and myself at the Boat Club, Conakry, West Africa, c. 1963. After a full day at the island, and returning safely to the club, the grown-ups would linger and have a drink or too before sunset. We kids kept diving and swimming until the bats flew out from the coast on their nightly hunt and it was time to go home. To be continued..

*This story is part of The mzungu chronicles:

*Mzungu, plural: wazungu. Mzungu is a Bantu (Swahili) word used throughout East Africa from Uganda to Kenya to Tanzania to Zambia and in the great lakes region, from Rwanda, Burundi, to Congo Kinshasa. It means “white man”, or woman. The origin of the name dates back to the 18th century, when European explorers came to East Africa searching for the source of the Nile, the gold mines of Solomon, or the Mountains of the moon, what have you. It literally means traveller or wanderer. Africans then, could not understand why Europeans could not stay in place, why they had to move all the time.  They thought Europeans were a tad crazy.

Thank you for flying Equinoxio’s Time-Space shuttle. It’s always a pleasure and an honour to have you on board. This is the last post of the year. Merry Christmas and a Happy New Year to all.