I was born in the Far-East, raised in Africa (the South?), went to Grad school in the US (The West? The North?). I’ve lived in (South) America for 30 years this coming December. In my compass-mad life, I have always looked back at Western Europe (ironically East of where I now live) as some sort of a beacon.

When I flew “West” to South-East Asia, 18 months ago, I packed a book by Douglas Murray, called “The strange death of Europe”. A brilliant book, no doubt criticized in many corners, starting with the Guardian. One might agree or disagree with Murray, the title or concept of the book is very valid: “The strange death of Europe”. Whether they are isolated events or general trends, I don’t know, but I propose we review a few cases which may (or hopefully may not) lead to Europe’s collapse. I’ve chosen a random geographic approach of countries I know (or not). This may be a long post. Grab a glass of wine, or beer, or a cuppa, and sit back.

Holland. (Or Netherlands, as you wish)

I lived in Amsterdam from 1964 to 1967. Between two African posts. Needless to say, the weather was a shock, but there was an upside: Freedom. I was 10, I got a bike, and was free to ride the streets of “AmsterrdOm” on my own.

My old street in Amsterdam. We lived at number 33.

A few weeks ago, Dutch Prime Minister Mark Rutte bought 14% shares of Air France-KLM on behalf of the Netherlands. He was concerned about the future of KLM in the Air France-KLM holding. True, Air France has been the hostage of pilot unions for years, but Air France saved KLM’s a** from bankruptcy a few years ago and Rutte’s purchase of Air France shares was “blind”: they did not warn the French government beforehand. In other markets, it would be called a “hostile” take-over attempt. In other centuries it might have meant war. Both Holland and France are founding members of the European Union. They don’t seem to be talking any more. Might I add that Mark Rutte is running the Netherlands with a “huge” group of 16 senators, who worked out an alliance with other parties in a senate of 75. Wait a minute: 16 senators decide the future of a country? 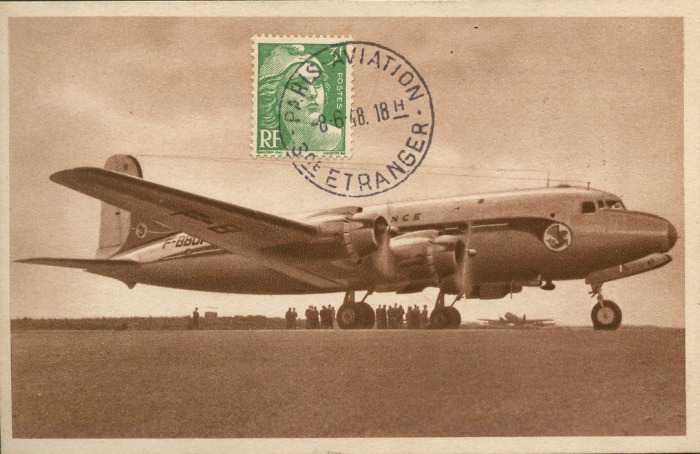 Air France DC4, 1948. I do have a special relationship with Air France. My father and his colleagues  re-built the Company after the war, making it for a while the “largest Airline network in the world”. Today Air France is practically “run” by the pilots’ Union which puts the Company in jeopardy. Will Air France follow the fate of Pan Am?

Brussel is one of my favourite cities. History, culture (the Belgian school of comics or graphic novels is nearly without equal). Great food, and Belgians have got to be one of the most welcoming and pleasant people I know.

In recent months, Belgium announced the purchase of new US-made fighter planes. There were European or French options, but the US planes were chosen. Wait a minute: the “Tramp” has insulted America’s allies over and over again, to the point that one may wonder how long NATO will last, and Belgium buys US planes? What happened to European cooperation?

The Brandenburg gate, Berlin. A symbol of Germany and reunification. Ironically, the French Embassy is on the other side of the columns. 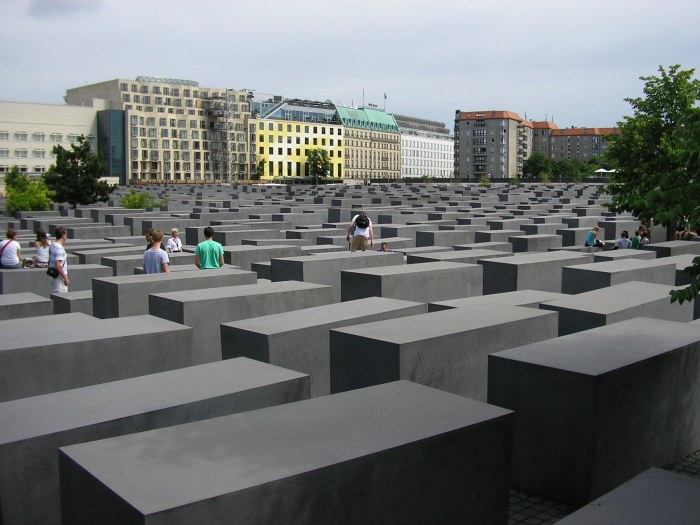 The Holocaust Memorial, Berlin. One of the most… “poignant” places I have ever seen. A reminder of the centuries of war and massacre that had marked European history until the creation of the European Union put that aside. Or so we thought.

Angela Merkel has run Germany smoothly since 2005. Yet, her electoral base has eroded slowly, to the point that she has abandoned the Presidency of her party, the CDU (Christian-Democrats) to Annegret Kamp-Karrenbauer (Aka AKK) and vowed to leave power in 2021? Why 2021? What sheer madness is so attached to power that politicians cannot let go? 2021 is still 2 years away. And for the past 2 years Germany has stalled every evolution of the EU. Proposals by Macron (good or bad I don’t care) have been ignored, put on the back-burner, or simply rejected. Europe cannot live without a strong Franco-German alliance. It has been so since the beginning of the EU with de Gaulle and Adenauer. Shouldn’t Frau Merkel resign with honours and leave way for younger generations? (Not AKK, bitte schön!) 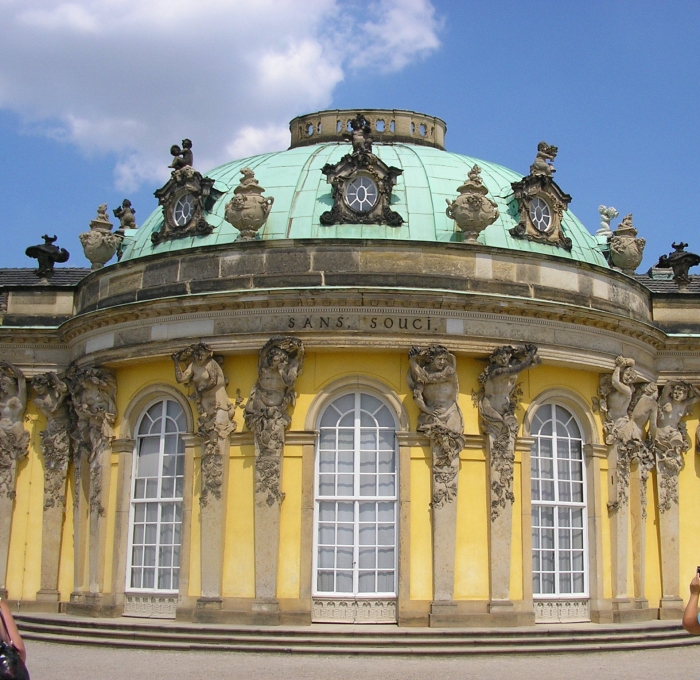 Frederick II, King of Prussia’s castle, built in the 18th century is aptly called “Sans souci”. Which in Swahili can be translated to “Hakuna matata”. Sounds familiar?

While the Queens of France rest in eternal slumber at Saint-Denis, French politicians have ignored (and generated) the country’s problems for 30-40 years.

“End poverty now!” This picture is about 3 years old. (Note: La France insoumise are a bunch of left-wing populist morons I do not support or stand) (I know, I may get enemies for free with this post) Truth of the matter is: French GDP per capita in constant monetary terms has been flat for 10 years. Flat. That means zero real growth for 10 years. In France. Something’s gotta give.

Saturday march 16th. (Mathias Zwick/Hans Lucas) The Fouquet is burning in front of anti-riot police who clearly have no orders, neither to put out the fire nor put out the riots. The “Ministre de l’Intérieur”, our “Home Secretary” was probably in a night club. Or was that the previous week-end?

The Fouquet afterwards. (AFP) There are flats above. “Privileged” flats as the French press would say, but flats nonetheless. Actually, a 100 yards down the left, a building was set on fire and the occupants evacuated. No casualty.

Meanwhile, that very same Saturday, President Macron was skiing in the South (of France) Poor thing needed a rest – well aware the Yellow jackets marched every Saturday – after a visit to Africa (East Africa. Kenya and Ethiopia – where I lived – and Djibouti – where I didn’t) Exhausting countries! (Tongue in cheek.) A question to my faithful readers who’ve read that far: Is there a pilot in the European plane? 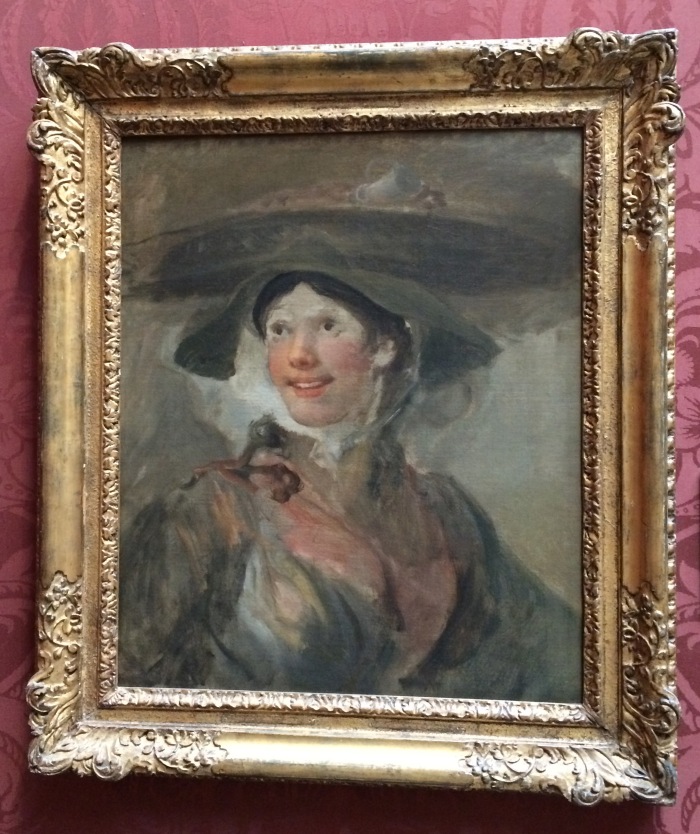 Hoggart’s Little shrimp girl (1745) at the National Gallery is probably wondering what the Dickens is going on?

Will the London bridge be forever closed to the world? After three years of apparent… resignation (?) on behalf of the British, crowds have come out on the streets last week-end. But Theresa May(be) has proven to be the worst British politician in the past thirty years. (True, Boris Judas Johnson and Jeremy Corbyn are strong contenders). Three years to reach no agreement? Neither inside nor outside the UK? Excuse me? Any manager in a private company would have resigned or been fired long ago.

Ask yourselves what would have happened if Theresa May or Corbyn had been Prime Minister in June 1940. Either one would have made Chamberlain look like a great statesman.

Never been there. In fact the furthest East I’ve been in Europe has been Praga which is fab. Will go back. Hungary? Not really interested. No disrespect to Hungarians. Current Prime Minister Viktor Orban (labeled “controversial” by the French press, which has a limited stock of adjectives), has taken a number of “political stances” not exactly aligned with Europe. Though he still takes their money. His latest trick? See below:

In this political campaign, Orban puts together in a “collage”, George Soros, the Hungarian-American billionaire, and Orban’s archenemy Jean-Claude Juncker, the President of the European Commission, alluding at a conspiracy by Brussels and Soros to enforce immigration quotas. Needless to say, that is false. But despite Brussels’ polite denial, no further action has been taken by Europe against Mr Orban, Esq.

The Milan cathedral. 2014. (There are so many places of Beauty in Italy!)

Italy could fairly be called the cradle of Western civilization (with Greece of course). The wealth of cities, art, and history is simply overwhelming. I could easily live months, years in Italy and barely scratch the surface. (An apology, I realize I have written three adverbs in this paragraph. Bad writing)

The birth of Venus, by Sandro Botticelli. Uffizi, Florence, c.1484. Painted over five centuries ago this painting takes an old Greek myth to the universal. Alas! in the past few months two “clowns” (for lack of a better word), Salvini and di Maio, elected democratically and designated vice prime ministers, have pushed Italy to the scenery of Commedia dell’arte. Racist stances, insults and general disregard for manners have been their MO. To the point that in February, Macron recalled the French Ambassador in Italy for “consultations”, diplomatic jargon meaning: we’re about to break diplomatic relations. The motive: di Maio’s visit in France to the yellow Jackets. In another century, again, this could’ve “meant war”.

Perseo holding Medusa’s head, Piazza della Signoria, Florence, 2014. This statue by Benvenuto Cellini (c.1454) was a reminder of what could happen to the enemies of the Medici.

Now, allow me to borrow an image taken last November by my friend Paul in Syracuse that froze the blood in my veins. Visit his wonderful blog at:

2019 Mussolini Calendar. I had to brush my eyes with my knuckles and look again. A Mussolini calendar on sale in Italy! I can’t imagine a Pétain calendar on sale on the streets of Paris. The kiosk would be torched. Oh. Maybe that is why 5 out 9 Champs-Elysées newspaper kiosks were indeed burned to the ground on that fateful Saturday?

Thank you my dear friends and readers to have come and read that far. (My longest post ever, I think. I promise I will not repeat that). Are we actually witnessing a “strange death of Europe”? I honestly don’t know. The fact is that many conditions seem to push for implosion. Also bear in mind the fact that historically such… agitation and lack of vision almost always leads to the emergence of… “providential leaders” aka dictators. The fools who ignore History will be condemned to relive the worst. And by fools I mean both politicians and electors. Things go on like that in France, and Marine Le Pen won’t even have to campaign to be elected. God forbid.

I hope I haven’t lost too many friends with this post. May I end with with an urban tag I’ve already posted before in a different context. I saw it in New York five, six years ago. At the time of “Occupy Wall Street”.

* This is the first installment of the “Mzungu Chronicles”. Unless otherwise stated, all pictures and comments are mine.

97 thoughts on “The strange death of Europe*”