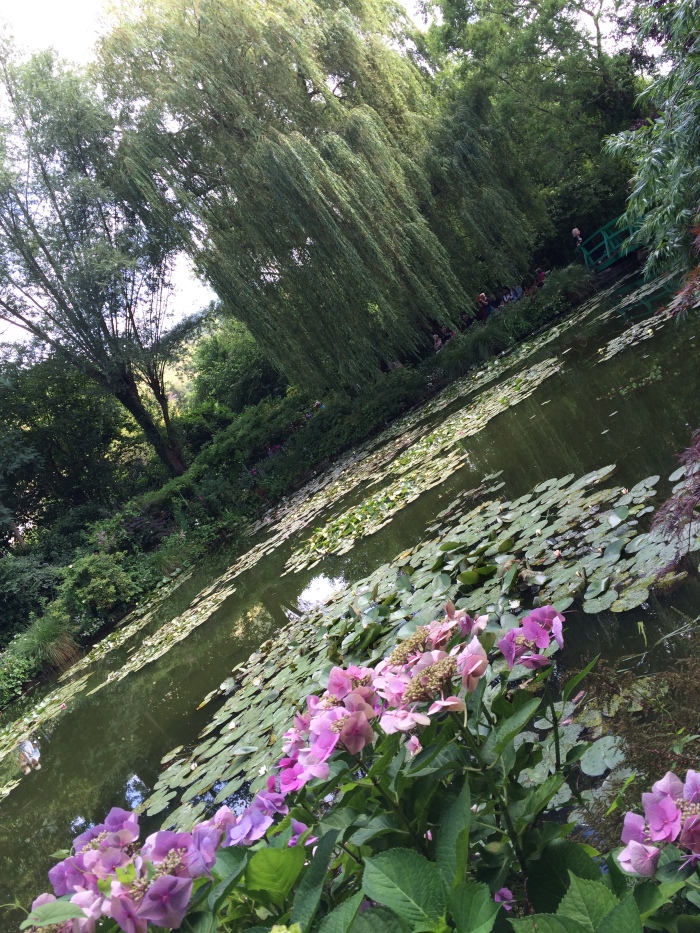 Monet’s house at Giverny is only 75kms away from Paris. Take the train at Saint-Lazare station, direction Rouen-Le Havre. Pass Mantes-la-jolie, and stop at Vernon. Skip the part where the French railroad has deliberately ignored the fact that Giverny is an hour’s walk from Vernon. (My compatriots tend to be very fact-avoiding; see the current election). You can queue for the bus to Giverny. Or take a cab. Which I did. The Vernon stop is clearly meant to support local transportation business. (Above: nympheas in Monet’s Giverny garden) 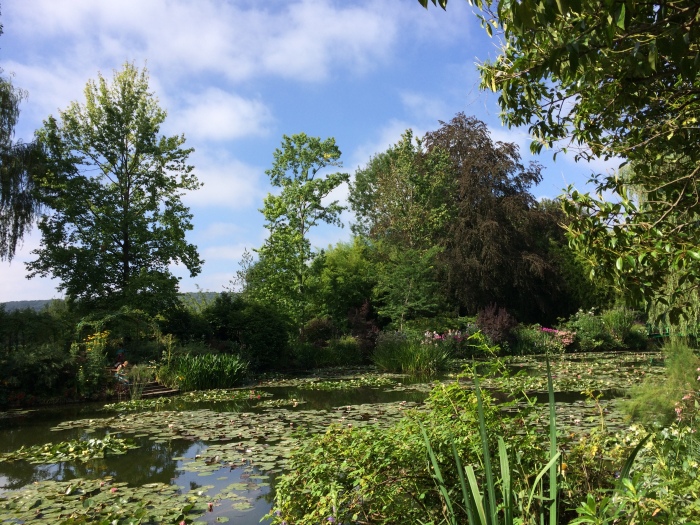 As soon as we crossed the Seine, I went into some sort of shock. The houses, the trees (I’m very tree-sensitive: the shape, foliage, colour, of trees, anywhere, is unmistakable. When I arrive at Roissy airport, I know I’m home because of the shape of the trees). I looked around. Some of the car plates ended up in 29. Department of Eure! I frantically hit my local, French, Android dumbphone screen for a map application. Takes me twice as  much time on Android as on I-Phone. Android was designed by Martians. To be honest, I understand Android users have the same problem/complaint about I-phones.

A typical house in Giverny.

I got the map running. Zoomed out, while the cab was driving along the oh-so-familiar-yet-never-seen houses and landscape. Giverny is about 30 kms away from the little village in Normandy where we had a house for many years. North-west of Giverny. 30 klicks. And we’d never come here. Giverny wasn’t popular then.

The Japanese bridge at Giverny. Orsay. I’d gone to Orsay the day before. A wise timing. Seeing that painting reminded me of an exhibition a few years ago at Marmottan. If you haven’t gone to the Musée Marmottan, make it a must on your next Paris visit. A lovely little museum in the west side of Paris. Great collections of painters such as Berthe Morisot, Renoir, et al. The expo consisted of a dozen paintings of the bridge by Monet over a period of many years as he gradually lost his eye-sight. And from the first to the last painting, one could see how he slowly became blind. Which must be a curse for a painter. And yet, he kept painting.

A 1902 photograph of the “pont japonais” at Monet’s house. (An apology about the reflections. Shooting conditions were not optimal)

The bridge today. Bottom right. There were a few Japanese visitors on the bridge. 🙂

The garden and pond are fabulous. Though it seemed that all the tourists who had deserted Paris last year after the many killings had suddenly flocked to Giverny. And as I walked the grounds, I had this eerie sensation of going back in time to my old house. 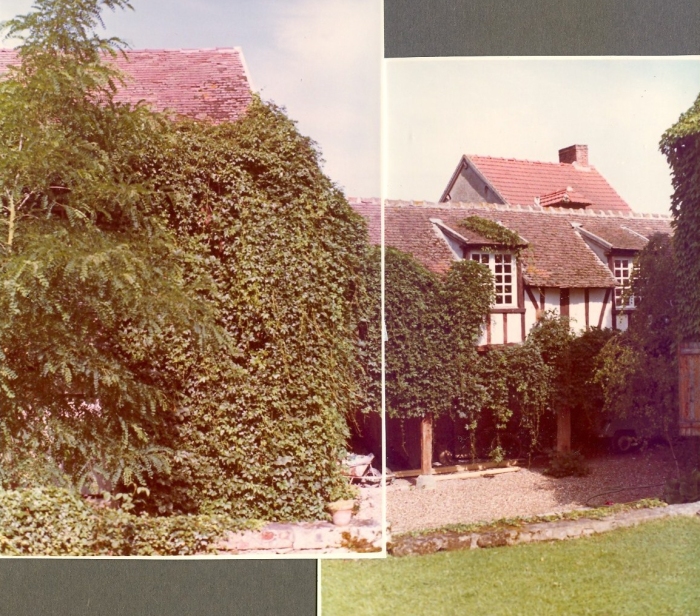 A partial view of our old house. c. 1975. Compare the brown wood and white plaster work below the roof to the house in the village above.

In the garden, going up to Monet’s house. One can see the door in the background. 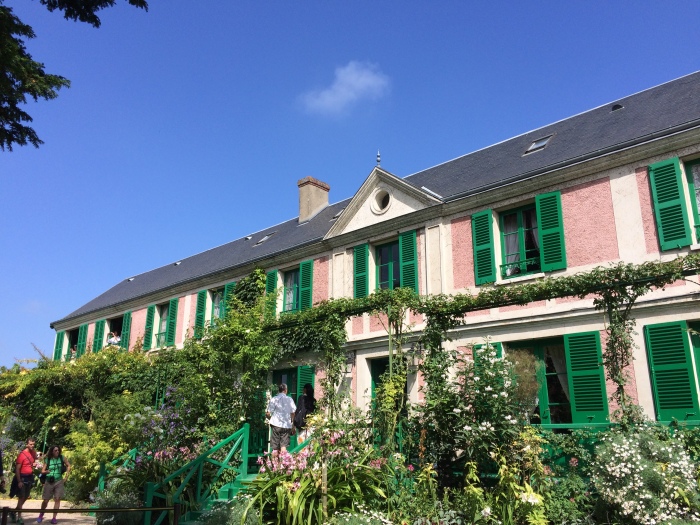 Monet’s house. Look closely at the façade. Only then did I understand my friend Jenny’s comment on Bulldog Travels about “pink”. Check her site here:

Pink is the new black? I then realized how Monet’s house, no matter its – historical – grandeur was just a plain, typical 19 century Normandy house. With strange façade colouring. 🙂 A house as there are still hundreds and hundreds, all around the region. A house with personality. And a history. Which makes it different from all the others.

Ours. Mid-sixties. Looking up close, it’s probably me in the centre, on the deck chair, reading a comics. Don’t get me wrong: ours was not Monet’s house. Those are just the memories that Giverny triggered.

Japanese woodblock. Monet’s house is full of those. Late 18, early 19 century. When Commodore Perry “opened” up Japan by force in mid 19 century, Japanese woodblock prints started to appear on the European markets. They were a revelation for French and European painters: the precision of the drawing, the choice of colours opened new avenues, particularly for impressionist and post-impressionist painters. And much to my delight Monet’s house is full of them. Originals, I believe. 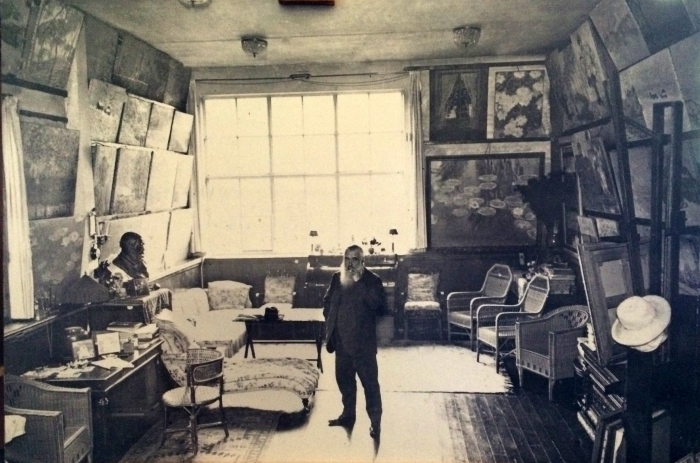 Monet’s workshop, at the turn of the century. The previous one, not this one. I would suspect the large window to be south-exposed. The workshop is at the left end of the house, as seen from the garden. One can recognize a nymphea painting to the right of the window.

The workshop today. Nicely preserved. Though I’m sorry to say that all paintings, eagerly photographed by zealous tourists (including myself) are copies. The originals are… at Orsay, Marmottan, The Met?

Thank you for “boating” with Equinoxio Cruise Line to Giverny. Happy Labour Day. For all of us – the entire planet but one – who celebrate it on May 1st.

59 thoughts on “A house in Giverny”