We are coming to the end of our journey. A travel in time and space starting in Ancient Indochina between 1896 and 1905. As I said in the first part of this series, it is an old photo album bound in beige cloth, my brother bought at a flea market in Paris and gave me as a birthday present. We’d both lived briefly in Vietnam and Cambodia (Muuuch later than those photos) 🙂

There are very few legends on those last pictures. The young woman above is captioned “Fa ré” or “La ré” woman. Couldn’t find any reference to such a tribe. Only a “H’re” tribe which would not fit geographically. I would have said she belonged to a Meo tribe, by her dress. There were many tribes in Indochina each with its own culture. I just read that Meo is now regarded as “derogatory”. (No offense meant). Some apparently now classify those tribes within the Hmong o Mong group. I don’t know. (Emoticon of throwing hands in the air) All pictures were taken between 1896 and 1905. All photos in this post are assumed to have been shot in Tonkin, northern Vietnam. 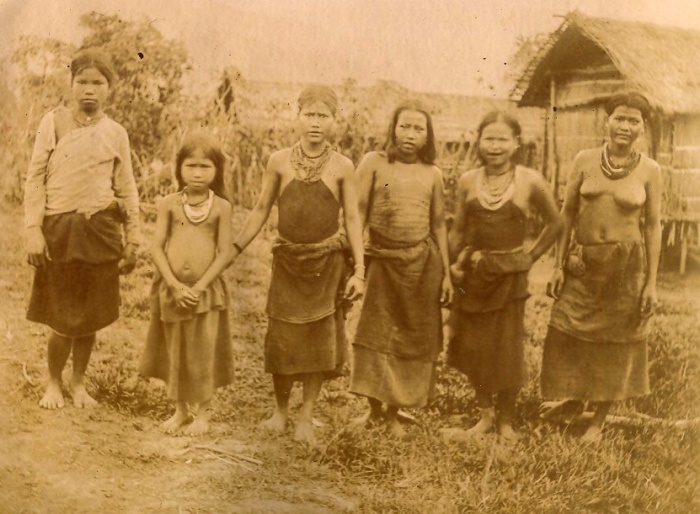 “Fa ré” women in front of their thatched houses. (A note to the prude. I thought about editing the young woman on the right. Decided against it. In many parts of South East Asia, all the way dow to Bali, in many cultures women were bare-chested up to the fifities. Honni soit qui mal y pense)

In most of those “hill tribe cultures” clothes were hand woven by the women. A tradition that still goes on I believe in some parts. (Same hand looms are still used in remote areas of Chiapas in Mexico) Note the bead necklace on one of the women .

See how one the children is carried, bungled in a length of cloth. An age-old custom, one can still see in many parts of the world, from Africa to Latin America. Leaves your hands free. 🙂 (Thumb-up emoticon)

Fa ré men? The thatched house is probably a “Big House”, where several related families live, a custom spreading all the way to Malaysia, Indonesia, Irian Jaya and New Guinea.

Tribal women and children. On the right, the little girl’s distended stomach can be a sign of malnutrition.

Tribe children. An eager would-be warrior on the right. 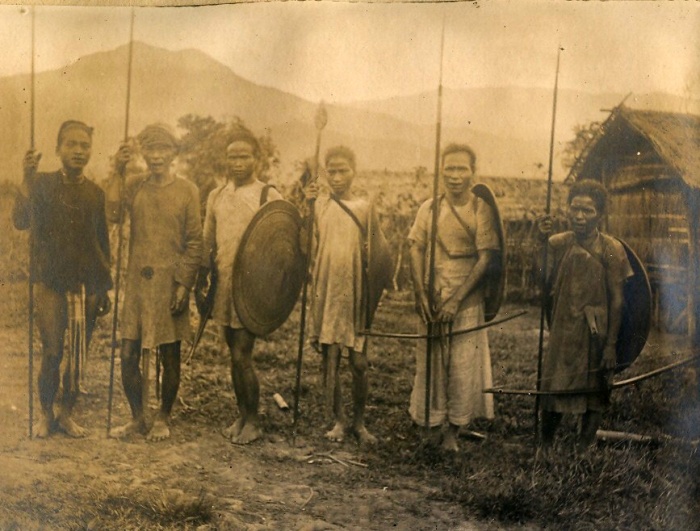 Fa re, Meo (?) warriors. See the spears, shields and bows. Mostly used for hunting game in the forest. 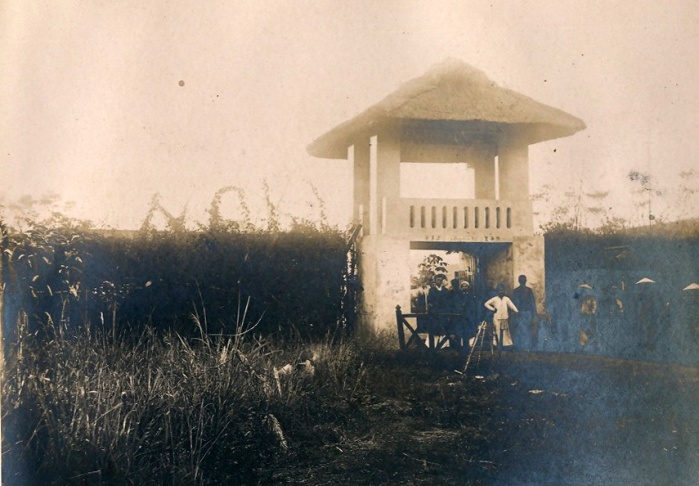 Change of scenery. What I assume is the entrance to a French military fort. Not much in terms of fortifications. I assume, based on previous captioned photos this to be the fort of Dong Trienh. Somewhere in Tonkin. Couldn’t find its current location. 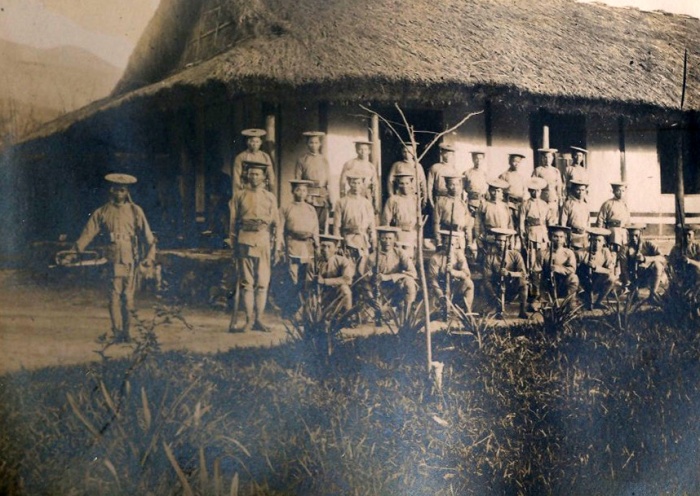 Colonial infantry Vietnamese soldiers. We’ve seen the curious hat, or helmet in previous posts. See the Clairon (Bugle man) on the left. The first row kneeling with their rifle at the ready. Approximately 30 men. I would say your average section. (A platoon in other armies) Generally under a lieutenant or sergeant-major. According to my memories in the military: 4 sections make a company. I was infantry in the 3rd company. (Company C in the US) 4 fighting companies plus support companies make a regiment (battalion) etc. etc.

The soldiers’ barracks or the officer’s? 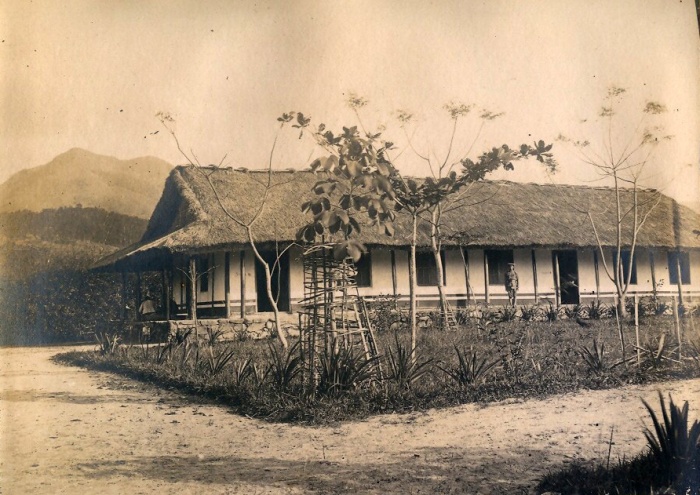 That is the building where the soldiers were photographed earlier. 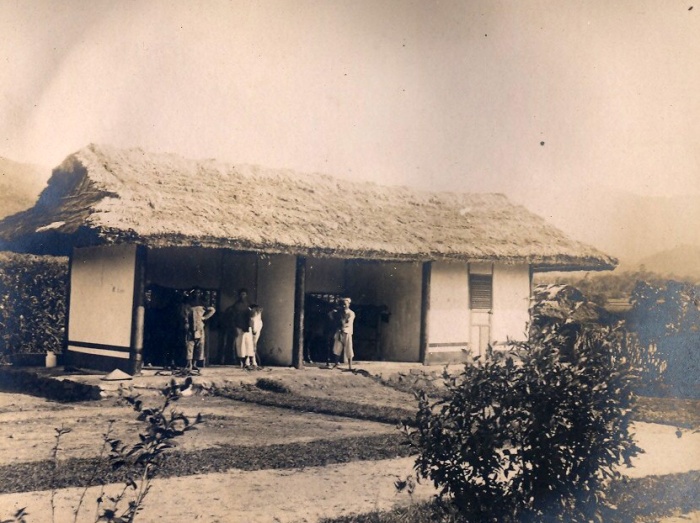 My guess: the stables. There is a white poney in the left stable. Which we will see later on.

You may recall the tribesmen’ shields and spears above. Were those seized, or bought as souvenirs?

The picture is of very bad quality. I did leave it for its strange caption: Fa Kua (Ta kua?) Chameleons. Chameleons? Hello? Help us there?

The above and following photos are more of a mystery. Those women and children are very well dressed. See the Chinese influence in the dress. Bead neclaces, Bracelets. See the very fine shoes. Who are they? the family of a local chief, or the members of the household? It was customary then to have many servants. And such elegance? Now watch carefully, the young woman’s left-hand nails are very long, a sign of elegance in Chinese influenced cultures. But her right hand? Nails are short. My bet? She probably is Thi-Bâ or Thi-Thoy. “First or second daughter” as maids were named when they entered a household. And the cute little boy is wearing what looks like a black sarong under a high collared white jacket.

I would say the same young woman. I like her “cocky” expression.

See the gold or copper neckbands. And the embroidered shoes.

On the left, the same young woman as above. Black or white “pajamas”. The umbrella is both to protect from the sun and a symbol of elegance.

One of the very few people to warrant a name written down. A favourite? A concubine? Possibly.

Wooden shoes. Note the elaborate pendant on the child on the left. (All photos are taken roughly at the same staged location) 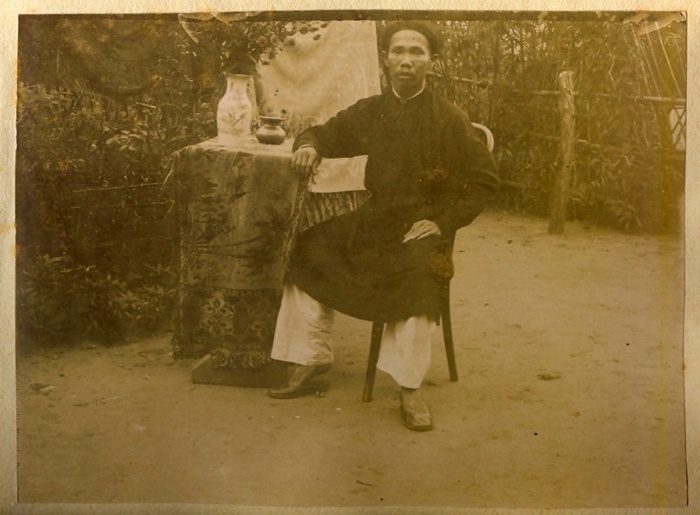 Hat? Hoit? (Look at the long nails on his left-hand. Possibly the Head of the servants? 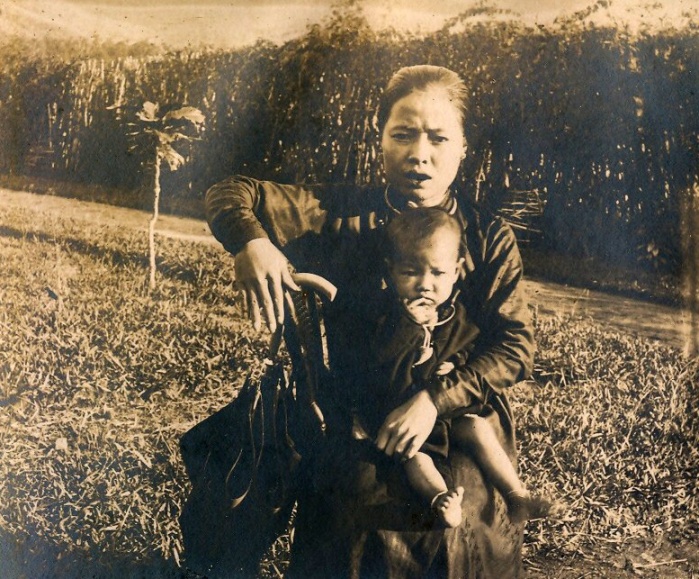 Joséphine again. No caption, but recognizable.We will never know the story.

Remember, my friends. Take out your photo albums from the shelf NOW. Write your full name on it. “This album belonged to…”. It will be very helpful for future bloggers, when your great-grandchildren dump your albums at the nearest flea  market in seventy years. The ancient Greeks used to say that if your name was remembered, whether for bravery, wisdom, or high achievements, you became immortal. So become immortal: write your name. (Reminds me I haven’t done it yet. Have to finish this post. Now)

Speaking of which, the owner of this album did not write his name. I assume it was a He. Did not even write down “moi” under a picture or the other. However, I believe the owner was this gentleman. No caption at all, no “moi” under the few pictures. Most photographers have few pictures of themselves. My guess is that this is the man who took us on a journey through Ancient Indochina:

No “Peter O’Toole” Lord Jim. Just a short frenchman with a waxed moustache and a funny beard. In line with that time’s fashion. A baggy uniform. Grade hard to tell. Thirtyish? Born around 1870, 1880 maybe? My grandfather was born in 1890. Somewhat contemporary. He fought in WWI. As a private. The family never did climb very high in Army echelons. (Except for one exception. But, that “Best beloved” is another story)

“At ease”. Our likeky author, with a colleague. I can now tell his (their) grades: Lieutenants. Two stripes on their sleeves. 😉

Thank you for traveling with us. Le voyage est fini.

This post and all the series is dedicated to the people of Indochina. I know (I check my stats) that we have had many, many visitors from Cambodia, Thailand, Vietnam, Laos. And I am very glad for that. Now, there are many uncertainties in those posts, if one or the other of our visitors from Indochina feels like commenting or straightening the errors of my way, that would be fantastic.