At the end of June, a team from Research International set out to conquer Europe´s highest mountain – Mont Blanc. As it transpired, the RI mountain squad was returned back by a blizzard just short of the summit.

The assault on Mont Blanc was co-ordinated by Brieuc Martin-Onraët (editor of this story; See italics) of the French office, and the squad comprised the following intrepid novices: Dave Phillips (author of these lines), Pete Evans, Roger Banks, Tom Perrot (Head Office UK), Martin Staehle (German Office), Erik de Kort and Loet Magnin (Netherlands), and Giorgio Rusconi from the Italian office, and the only experienced mountaineer. All the above had invested in some training prior to the trip; ranging from drinking less, to serious athletic or troubled to ascertain the likelihood of conquering it armed only with a combination of “gung-ho” and team spirit.

The idea of climbing Mont-Blanc came up as a motivation exercise for the French Office. However, when I (B. Martin-Onraet) presented it in Paris the plan was received with typical Gallic shrugs and “are you crazy?” retorts. In French. A few weeks later at a regional Company Seminar in Germany, I told my colleagues about my disappointment around a couple of pints. (Holding your beer steady when you work for a British company is a major job requirement). And, much to my surprise, after only a couple of trivial questions, they all downed their beers and said: “Let’s do it”. (Back to Phillips)

On Thursday June 29th, the three UK representatives were joined by Dave Phillips, fresh from entertaining the troops at a company bash, at a Paris Hotel. Brieuc was picked up from RI´s Paris office and, via the TGV, the Anglo-French party arrived in Chamonix on Friday evening and met up with the German, Dutch and Italian representatives.

On the way down to Chamonix by train, the Brits caught their first glimpse of Mont-Blanc. Given the lack of any significant mountain in the United Kingdom, a look of shocked surprise was displayed on everyone’s face. Banks grabbed something in his pocket, put it to his mouth and inhaled. I said: “Why on earth are you using an inhaler, Roger?” “I have just a wee bit of asthma. Nothing to worry about…” I thought to myself: “Asthma? Above 4,000 meters? Nothing to worry about?”

L. to r. Dave Phillips and Roger Banks upon their arrival at Chamonix

On Saturday we familiarized ourselves with the kit, supplied by Giorgio Rusconi from Italy, which comprised ice-axe (piolet), crampons, glacier shades, gaiters, boots, lamp (for night climbing) and kilos of salt restorative tablets.

Giorgio was the only true mountaineer. And supplied us with but the finest quality equipment. At a steep price, but, oh! learning number one: always get the best equipment. Always. Being a miser can cost you your life.

Having terrified ourselves during a visit to the Compagnie des Guides, where we inspected the mountain guide deaths list and were told that the climb would be of 24 hours plus duration, we piled off to practice on the Mer de Glace (sea of ice). This involved crawling along minuscule rock ledges, levering oneself along the walls of crevasses with the piolet, and climbing ice walls with the help of crampons. L. to r. Martin Staehle, Pete Evans, Brieuc Martin-Onraët and one of our faithful guides.

(Take me to your leader!) 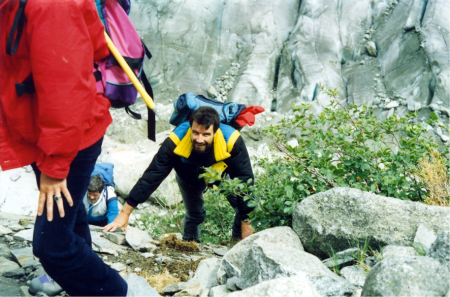 The rest of the weekend was taken up with in-depth anxious discussions, sampling of the local spirits, phone calls to the folks back home, and “braserades” (like a BBQ at your table).

Sunday saw low cloud base and frozen cables which knocked the téléphériques out, so an Anglo-Dutch low altitude yomp took the place of the planned “practise run” up Tacul. At the time, this was a disappointment, but with hindsight, a blessing. Similarly, the guide´s evening briefing – “The show goes on, we leave tomorrow morning” – initially caused relief and pleasure, but this turned rapidly to feeling of mild panic.

Equipment was checked for warmth and weather-proofing, beers were replaced by mineral water, and the party retired early to bed. Everyone slept badly.

Monday: up at 06:00, coffee, a walk and bus ride, and we were at the foot of the téléphérique, in les Houches, in the green valley at the center, going right, below the clouds. We were then transported to Bellevue, where we took the mountain train to Nid d´Aigle, at 2364 metres.

Our projected route was to take us from right to left to the Aiguille du Goûter, spend the night at the refuge, then climb the Dôme du Goûter to the top of Mont-Blanc and go back down via the Glacier des Bossons. “Back to Phillips”:

We set off at a stiff pace on a straightforward but steep rock walk which led us to the first of the three mountain refuges we planned to visit – Tête Rousse. Dotted along the route, at various points, were iron crosses – memorials to climbers who died over the years. Climbing though the cloud, we felt the first effects of altitude, a light-headedness accompanied by slight nausea. Glowing and exhilarated, we downed a light lunch and large quantities of energy tablets then surveyed the next stage, a three hour climb, rising through 700m, up across the “corridor of death” to the night´s refuge – Aiguille du Goûter.

At this point, each pair of neophyte climbers was roped to one of the guides, so we knew the serious stuff was coming. Eschewing crampons, the party trudged off across the crisp snow, which bathed in bright sunlight, lay like a blanked over the peal above and over the rocky outcrops leading up to it. Our breathing was slow and rhythmic as we jammed our piolets into the ice.

Then came the difficult part

The party was brought up short at the “couloir de mort” – the only point at which the guides themselves were more than a little apprehensive, partly since quite a few of their number had died there in climbing accidents since the war, and partly because fresh snow falls had increased the chances of an avalanche. The corridor itself an almost sheer face and the only route across was a series of erratic depressions formed by a small group of climbers who had passed though earlier in the day.

Pete Evans, Dave Phillips and their ageing guide were the first team to cross. The guide, who for reasons best known to himself had decided that crampons were not necessary for this stage, was edging nervously along when Pete missed his footing and fell down the mountainside. His descent was stopped only when the rope jerked taut and Dave and the guide threw themselves flat against the mountain, burying their piolets in the ice and straining to prevent themselves slipping. Pete´s efforts to regain the ledge were hampered by the slippery compacted snow which his fall had created. To cries of “Allez, allez, c´est dangereux ici!” from the guide. Pete hacked and scrambled his way to safety – shaken but unhurt. Naturally this episode did little to boost the confidence of the other four teams watching on the other side of the corridor.

I was in the second or third group after Pete’s and Dave’s. Down below the packed snow corridor, there was a sheer drop of several hundred feet. When Pete slipped (no crampons) the guide planted his piolet in the ice wall. His job. But were it not for Dave’s immediate reaction to plant his own piolet in the ice as we’d been taught to, Pete’s weight would have ripped Dave off and the guide, and… down to the ultimate fall. Pete’s ropes formed a large V with Dave and the guide at the top hanging for their lives. Pete planted his piolet were he was. (Training!) Tried to climb up. Slipped again. Twice. The other guides were getting ropes ready but there was little they could do. Then, at the third attempt, Pete got a foothold and managed to get back up.

Learning number two: follow protocol as Americans would say. If the book says “crampons”, put on the bloody crampons. Guide or no guide.

Learning number three: Training, training and training. Were it not for Dave’s and Pete’s training, Dave wouldn’t be here to tell the story.

The rest of us then crossed the Corridor of Death with shaky legs. 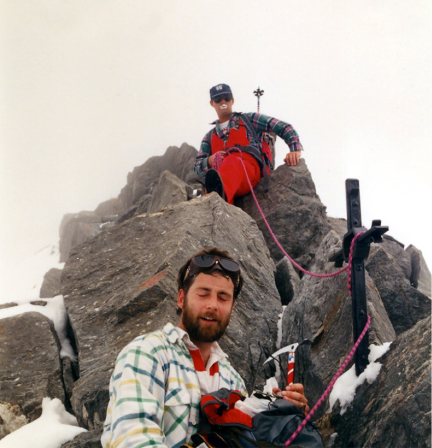 Front: Roger Banks taking a short break. The rope that secures him to Dominique,

the guide above, hangs loosely on a metallic cross. Testimony of a fellow mountaineer

who didn’t make it.

Then came the difficult part. (The second of a few) The evening´s refuge sat atop the Aiguille du Goûter, glinting in the bright sunlight, half a kilometer away up an almost sheer rock face dusted with snow. Ice axes and crampons were useless, so fingers were jammed into rock crevasses to obtain a purchase and aching limbs forced into levering bodies up over the rocks – the sheer drops on both sides and behind us acting as strong motivation no to lose concentration. The refuge seemed to remain painstakingly out of reach but was eventually attained at around 17.30 on the Monday.

A word about “Cordées”. We were roped in groups of three. In my group, first the guide, then myself, then Tom Perrott. The thing about the rope is that it has to be tight at all times. You secure the one below by pulling and tightening the rope as the man below climbs in case he slips. My friend Tom Perrott is quite a good bit taller and heavier than I am! During the climb I had the sensation that I was pulling him all the way. Next time I’ll ride third! 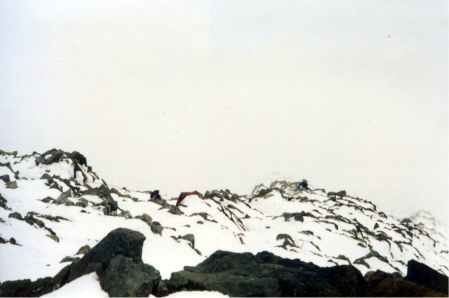 Taken from the refuge, this is the wall we climbed. The view goes down. Not up.

Celebrating at the Refuge du Goûter. Made it so far.

The Refuge comprised one large room with three dormitories, each containing two rows of continuous bunks, and was soon filled with bodies attempting to grab some sleep. At around 12,000 feet, however, sleeping is not easy, so when the guides evicted us from our bunks at 02.30 none of the team had managed anything other than exhausted rest.

Sunset from the Refuge du Goûter

Sunset at the top of the world (at about 09:30PM) had been a wonderous sight – a corrugated carpet of cloud below us and vermilion peaks on all sides. The morning walk, however, compared in terms of beauty. Leaving at 03.00 in sweatsoaked clothes, we began the ascent of Dome du Goûter.

Crisscrossing the mountain the team looked like glowworms, by virtue of the orange miner’s lamps we were wearing, whilst above us the clear starry heavens looked unnaturally close, and down to our left and right, either side of the ridge, twinkled the lights of Chamonix and northern Italy. The silence was broken only by the crunch of  boots on snow as we slogged on towards Refuge Vallot planned final stop, just 500m below the summit.

And then a few snow flakes started to fall…

*Original text by Dave Phillips. Editing (in italics) by B. Martin-Onraet.

44 thoughts on “The White Mountain*”